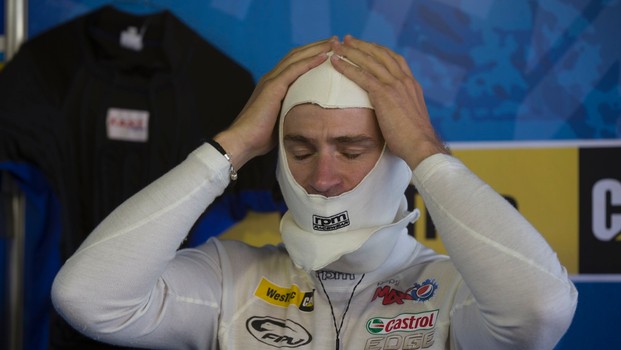 After Austin, the heat isn’t slowing down,with more scorching temperatures expected over the race weekends in Darwin andTownsville. During these races it’s so important for teams to have cool suitsrunning properly for their drivers – as we saw in Texas, problems withFord Performance Racing’s cool suits had a huge physical impact on drivers.

But what is a cool suit exactly? How doesit work and how does it help the driver over the weekend?

“We’ve got two little elements in thebottom of a carbon box and it runs it’s own separate water system,” he explained.

“We’ve got a water reservoir and a tinyelectric pump – like a pool pump – that circulates water.

“Once the reservoir is full of water, wefill the box with dry ice.”

This happens before the race – theteam fills the carbon box with the dry ice element, turns on the pump and thatpumps water around the system.

“The driver wears the suit – which youoften see on the podium – and that’s got what adds up to about five or sixmetres worth of tiny tubes, sewn into the upper part of the fireproof underwear.

“Tiny capillaries go all over the body,down to just above the groin and there’s a series of loops around the chest,heart, up and around the lower part of the neck, and they stop at the bicep.These tubes carry the ice cold water.”

With a range of sensors, the team canmonitor how hot or cold the system is running.

It needs to be running at approximatelyfour degrees Celsius for the driver to feel the effect.

With such high cabin temperatures – inTexas, it was around 50-60 degrees – it is crucial to have the cooling elementsright. If there isn’t enough water or surface area in the elements, the watercan freeze, which is detrimental to the cooling efficiency of the system.

“It’s a really fine line – every timeyou put the ice in you cringe and hope it doesn’t freeze,” Roberts said.

That’s often what has happened when youhear the cool suit has failed – there’s an imbalance, which could becaused by something as simple as the seat belt harness pinching one of thetubes and restricting flow. The driver will then have lukewarm watersurrounding his body.

Unless there’s an issue, other than havingto put the dry ice in, it’s a maintenance-free system.

“We’ve got a shutter drop in the bottom ofthe carbon box – we can shut the dry ice off from the elements to preventfreezing, that’s how we regulate our temperature. Nine times out of 10 we don’ttouch it,” Roberts said.

“After the race we quickly plug in– it’s 10 to 15 seconds before it’ll freeze once the system stops, so youhave to be really quick.”

And it’s not just the hot events likeAustin and Darwin where the cool suit is important – it is run at everyevent, because despite the outside temperature, the heat soars inside the cabinand the driver is physically working hard every lap.

But as we saw in qualifying in Austin– when Jamie Whincup opened his door for a refresher during the session– not all drivers use the cool suit during qualifying.

“At the hotter events it’s a littledifferent,” Roberts said.

“Some drivers prefer to be cool and calm inqualifying and some people – like Will (Davison) and Frosty (Mark Winterbottom)– brave the elements and think it will give them the edge not to carry aroundthe extra weight.”

In total FPR’s box is around 10kg when it’salmost full, so it’s an extra weight penalty during the session.

“Every bit of weight is a half-tenth orextra tenth, so we try to reduce weight as much as we can, where we can.

“Dave Reynolds like his (cool suit for) allthe sessions and Alex (Davison), but Mark and Will are probably a bit harderand like to have that less weight.”

In the past five to six years, Roberts saidthey had taken the cool suit out only a handful of times – and each time thedriver wanted it back in.

Staytuned for our follow up story with FPR’s Human Performance Manager GlennLindsay on how the cool suit helps the drivers’ function and performance in thecar tomorrow at 12pm.

06/06/2013
Related Content
15' The Bottle-O FPR Ford ›
15' Pepsi Max Crew ›
Stay In The Know
Sign up to the Virgin Australia Supercars Championship Newsletter
We use cookies to ensure that we give you the best experience on our website. If you continue to use this site we will assume that you are happy with it.Ok