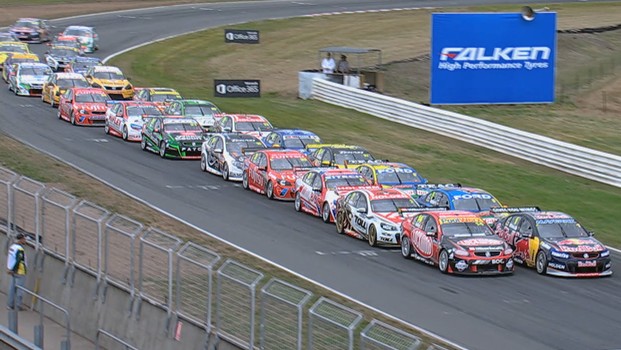 Next week the V8 Supercars are headed toDarwin for the SKYCITY Triple Crown, from June 14-16. The return to the Top End of Australia– and to racing on Australian shores – also means the return of the60/60 Super Sprint format.

Saturday’s race is split into two halves,with a short 15-minute half-time break, and the second half beginning with adouble file rolling restart.

And while the last two restarts in Perthand Tasmania have been pretty clean, drivers are predicting there could bechaos because of the nature of the circuit, with a long straight leading intothe tight first corner.

Norton 360 Racing’s James Moffat had astrong result in the last 60/60 race – held as part of the Chill Perth 360 last month – having finished tenth in the 60/60 race and followingup tenth and eighth in Sunday's two races in his Nissan Altima.

But ‘Moff’ warns the restart could betricky at Hidden Valley.

“So far with the two 60/60 formats androlling start second (halves), we’ve been at circuits where the run to thefirst corner has been very short, maybe a matter of 200 or 300 metres,” Moffatexplained.

“Whereas in Darwin it’s going to be a longhaul into turn one.

“So it might be a bit more chaotic thanwhat we’ve seen in the first couple of rolling starts this year.

“The rolling starts are quicker (than anormal start) – you’re going quicker than you normally would when youreach the first corner and are more congested because everyone, more or less,gets the same start,” he said.

With a standing start, he explained somedrivers got good and bad starts, which would spread the field – but with the rollingstart cars are literally mirror to mirror, bumper to bumper and going 60kmfaster than they usually would be when the flag drops.

Davison is worried there will be a “massivewreck” if something goes wrong with the rolling start.

“I’m not a massive fan… None of the teamsneed big damage at the moment. It costs money.

“I think standing starts are interesting –everyone gets different starts, there are variables involved in getting a goodstart. There’s much more overtaking and jostling… but when we’re congested, ifsomething goes wrong and someone clips someone, it’ll go wrong for everyone.”

However, one of the positives Davisonraised on the 60/60 in Darwin was it would work well at a track where there aremany passing opportunities.

“You need it at a track where you can pass,otherwise it becomes a processional sprint race... But I think with the high tyredegradation, the longer races are the interesting ones in Darwin.”

For more information on the SKYCITY Triple Crown at Hidden Valley Raceway, view the event page. Tickets are available through Ticketek.

James Moffat  ›
15' Nissan Motorsport ›
2013 SKYCITY Triple Crown  ›
Stay In The Know
Sign up to the Virgin Australia Supercars Championship Newsletter
We use cookies to ensure that we give you the best experience on our website. If you continue to use this site we will assume that you are happy with it.Ok