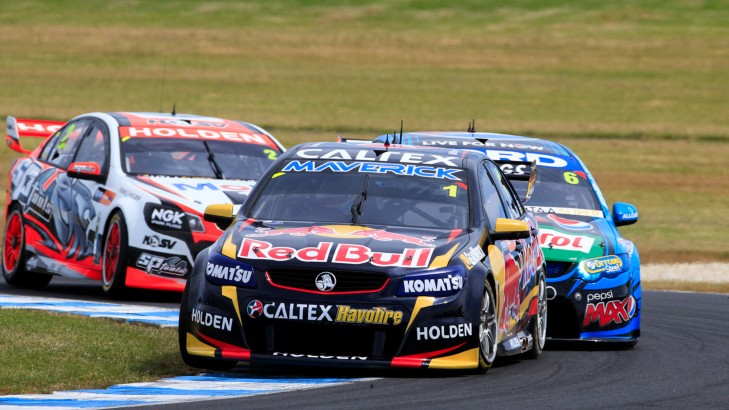 As Jamie Whincup heads to grand finale the Sydney NRMA 500 with enough points to seal the 2014 Championship, Johnson has questioned whether a shake-up of the points system - which has remained stable since 2008 - would help increase excitement for the last event and bring the title fight down to the final race in the coming years.

"That'd be interesting - not from any other reason than the fact that it is great to bring it to the last round," Johnson told v8supercars.com.au.

His opinion seemed to be influenced by the amount of focus on his team for the big finale, with the return of Marcos Ambrose in a wild card XBox entry ahead of his 2015 V8 Supercars assault and the transition to DJR Team Penske.

"I think it's helped the series to do something like this, to be able to bring the dead rubber alive again ... I honestly don't think Marcos knows what he's in for!" Johnson said.

However, Champion elect Whincup - set to be awarded his sixth title in seven years, in Sydney - disagrees.

While his opinion is to be expected, Whincup made the point that banking maximum points every round is what a Championship win ultimately means.

"We don't want to cheapen what the Championship is all about," he told v8supercars.com.au.

"I'm certainly against weighting cars, like a horse race, or parity things, or double points for the last round ... I don't want to get into where anyone can win on any day. It's still got to be the best team wins on the day. That's what racing is all about."

The soon to be six-time V8 Supercars Champion is all for innovative ideas and format changes - as long as everyone has the same opportunity to win.

"Hopefully it stays the same as it is and everyone's got equal, absolutely equal opportunity to do the best job.

"There's that entertainment factor that needs to be considered, and you do that with different formats, with different strategy, different tyres, night racing, day racing, all sorts of things like that. But [it's] still the same for everyone.

"Everyone's got the same opportunity to do the best job, but different formats which keep people thinking. Everyone makes mistakes and moves it all around."

Given his domination of the Championship in recent years, finishing in the top two for the past seven years, it seems a suggestion of changing the points could be aimed specifically at handicapping Whincup. "All I can say to that is don't slow me down - let's put all our effort into speeding everyone else up," he said.

The V8 Supercars points system remains unchanged for 2015, with 300 points allocated across a weekend.

V8 Supercars ran a double points system at the Formula One Australian Grand Prix support event earlier this season, in celebration of the F1's first time with the points structure.

While Shane van Gisbergen won the first three of four races that weekend, Scott McLaughlin was victorious in the final race, with his fellow Kiwi 14th, and therefore took out the MSS Security Challenge trophy.

Saturday Sleuthing: Ambrose in a Holden!