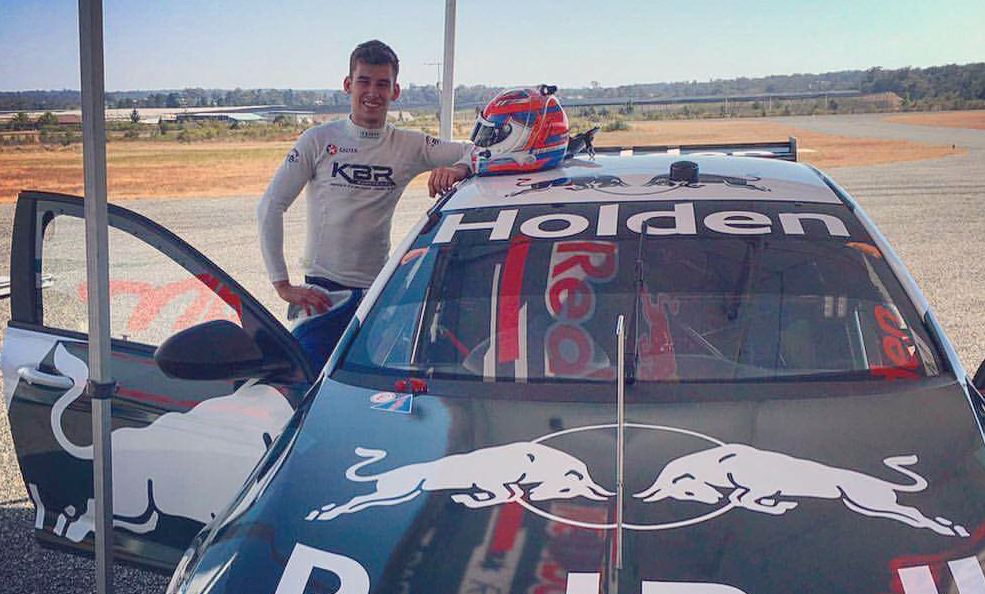 Triple Eight mechanic Kurt Kostecki says it was ‘pretty special’ to undertake aero-testing duties in the new ZB Commodore, despite the extra work it has created.

The factory Holden squad has postponed the car’s first full track test at Ipswich that was to take place this Thursday, due to damage sustained during the test.

Running at Queensland's Stanthorpe Airfield proved brutal on the brand-new car, with stones flicked up by the tyres causing extensive bodywork damage.

A regular in the Dunlop Super2 Series driving a Triple Eight-built VF, the 19-year-old Kostecki is also a full-time mechanic with the main series squad.

“Everyone is joking around, saying I’m the one that broke it, but I was just doing what I was told!” Kostecki explained to Supercars.com.

“We were pretty conscious straight away that the stones were damaging the car quite a lot, so we did what we could to minimise it, but there’s only so much you can do at 200km/h.

“I’ll obviously be helping to fix the car now. Because all of the bodywork is new, we don’t have a massive amount of spares.

“We have to get a few new parts made and we’ll be waiting on them, so that’s what’s holding the test back. We want to make sure the car is perfect before we do the Ipswich day.

“We’re currently preparing the race cars for Bathurst and the (V6 turbo-powered) Sandman for its demo as well, so there’s a bit going on at the moment.”

Working on a Sunday isn't so bad. Thanks for the keys to the new ZB today @redbullholden #HWPO

Kostecki was given laps in the Sandman during a V6 turbo development test at Ipswich earlier this year, before becoming just the second driver to get behind the wheel of the ZB.

“Driving the ZB was a really cool experience for me, especially to have such a big influence in the build of the car, being the number 2 mechanic on it,” he said

“To put in all the hours, it was a big push to get it ready on time, to then get behind the wheel of something I built is pretty special.

“As a driver, the aero testing is about consistency, trying to keep everything the same so the data is as relatable as possible from run to run

“We had the calibration test and then the main runs at 200km/h where they get their (downforce) numbers and then the coast-down to see how much drag the car has.”

Kostecki added that driving a Supercar on an airstrip was an unusual feeling.

“I did some runs in a road car to see what it was like beforehand and when you’re in that the runway seems so long,” he said.

“But as soon as you’re in a Supercar doing 200km/h the road runs out pretty quick!”

Kostecki will be part of Triple Eight's crew at Bathurst while also driving in the 250km non-championship Dunlop Super2 race on the Saturday.

The youngster currently sits ninth in the Super2 Series and says he will return to the second-tier class next year, while also chasing a PIRTEK Enduro Cup co-drive.

He already has Virgin Australia Supercars Championship starts to his name after a two-event deal to fill in for the injured Lee Holdsworth at Preston Hire Racing last season.