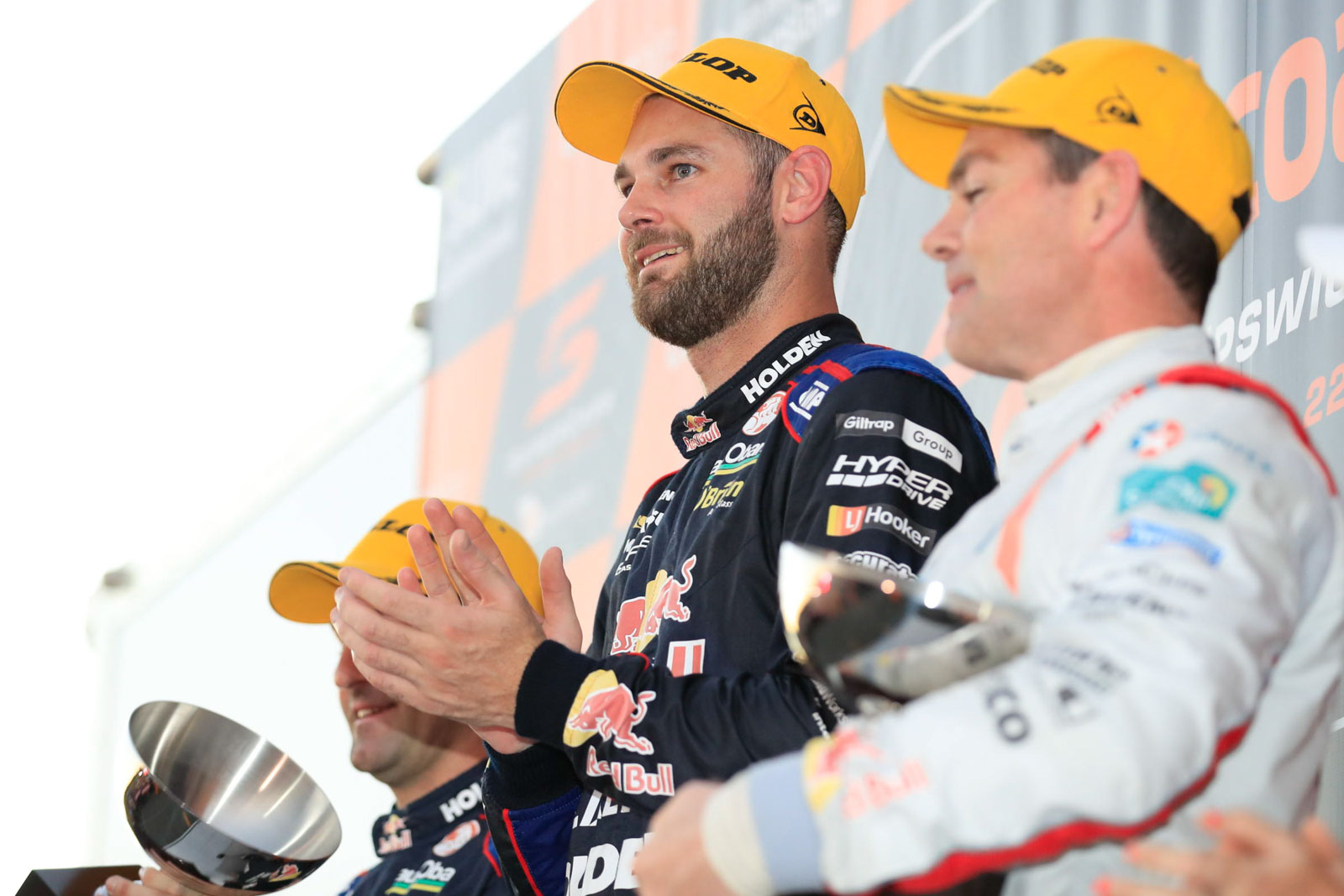 Shane van Gisbergen expects to fight his two teammates for the Virgin Australia Supercars Championship until the end of the season – and emphasises fans shouldn’t count Craig Lowndes out of the contest.

Much focus has been on the intra-team battle between Red Bull Racing Australia’s van Gisbergen and six-time champ Jamie Whincup, but the quick Kiwi is just as focused on Lowndes as a threat.

His older teammate – who is run in the TeamVortex garage next door to the Bulls, housed with TEKNO – was strong at last round Queensland Raceway, notching up his 12th career win at the circuit in a Supercar, and his second for the season.

“He’s part of the team, he does everything with us – same car and set-ups and all that – and he definitely wants to do well as well," Van Gisbergen said.

"He was the fastest car by a long way at Queensland Raceway on the Sunday. He dominated everyone.”

Whincup leads the title tally after eight Championship events, with one SuperSprint left before the two-driver enduros.

There’s 110 points back to van Gisbergen, and the #97 racer could find himself under threat from behind, with defending champion Mark Winterbottom 10 points away, and Craig Lowndes only 40 points behind van Gisbergen.

The season began with an incredible variety of winners, with 10 different drivers taking the first 13 races of the year, before the results started to stabilise.

As many would have predicted leading into 2016, the Triple Eight trio is towards the front, challenging Frosty, with Scott McLaughlin’s Volvo also in the top five.

“At the start of the year, the season was crazy with so many different winners and the competitiveness at the front, but the last three rounds I think we’ve really stepped forward and been the benchmark team.

“There’s been a few guys up there, but we’ve been more consistent, so as a result, the points table shows it that way.

“All three of us are up there and, hopefully, it’s us fighting it out at the end.”

Van Gisbergen didn’t take long to lock in a win with his new team at the second Championship event in Tasmania, but backing it up was not easy, after slipping in oil in the second race that weekend when he looked a sure fire bet to take the 150 points.

He revealed that adapting to the car was not as easy as he thought, despite jumping from a TEKNO Autosports customer Triple Eight car in ‘15.

“The car was very, very different to what I thought it would be,” he said.

“I thought ‘Oh, it’s just going to be a Tekno car, maybe a little better’, but it was probably almost a bigger change than going to the Tekno Commodore from the Stone Brothers Falcon.

“It was completely different and didn’t suit my driving style at all, so we’ve had to come up with an individual set-up and work our own way. Always been fast – every round we’re one of the fastest cars, but very hard to drive and a lot of mistakes.

“But since the pre-Darwin test, it’s been completely different and much nicer to drive.”

Van Gisbergen has raced at the Spa 24 Hours since the last Supercars event, with the Red Rooster Sydney Motorsport Park SuperSprint later this month from August 26-28.

Stay tuned to supercars.com for ‘Foges’ full interview with the title front-runner.