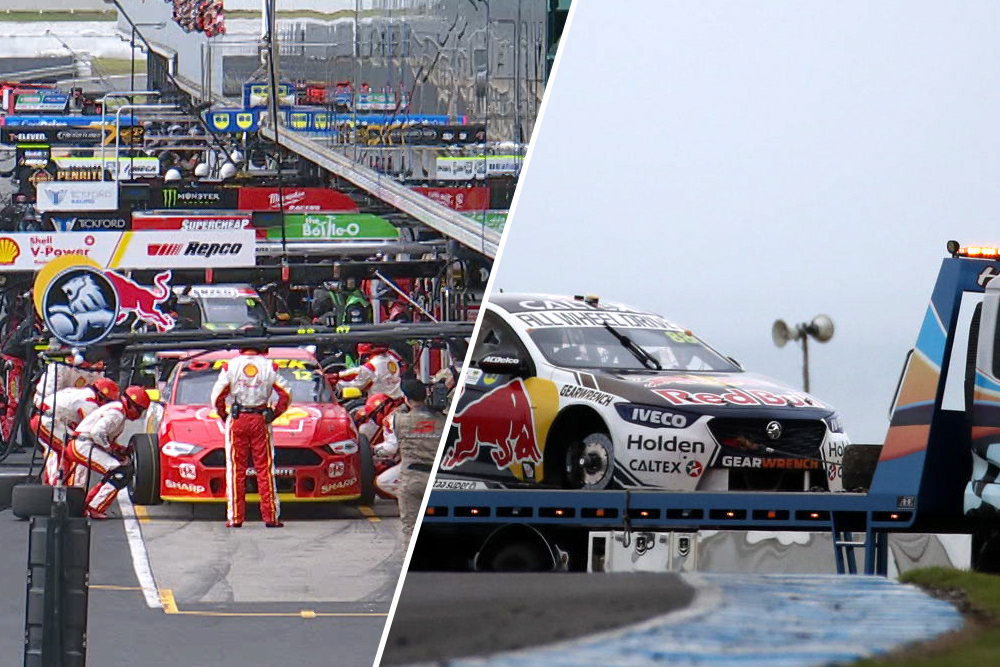 The Ford squad has been docked 30 teams’ points and $3,000 per car after the brake lock mechanism on both of its Mustangs temporarily disengaged during their pitstops.

Scott McLaughlin and Fabian Coulthard finished the race first and second, with the result unchanged by the penalty.

The outcome is consistent with penalties handed out for the same infringement at Symmons Plains last weekend.

Red Bull HRT and IRWIN Racing have meanwhile each lost 30 teams’ points and $5,000 after having cars lose a wheel during the race.

Jamie Whincup’s #88 Commodore shed its right-front shortly after a botched pitstop, from which the car was released before the wheel had been tightened.

It’s the third time in six months that a Red Bull Holden has lost a wheel in a race, following earlier issues at Bathurst in 2018 and Albert Park last month.

Brad Jones Racing is just behind the factory Holden outfit on 1,234, while IRWIN Racing on 568 points is the best single-car operation.

Following admissions to the breaches by each Team, the Stewards imposed Penalties of a Fine of $5,000 and the Loss of Thirty (30) 2019 Virgin Australia Supercars Teams Championship Points on each of Triple Eight Race Engineering (Australia) Pty Ltd and Chasports Racing Pty Ltd for breaches of Rule A4.4.1 (Safety, Each Competitor is responsible for all safety aspects of the Team including that Competitor’s Car or Cars, Team members, equipment, Pit Garage and visitors to its Pit Garage at all times) after wheels from Car #88 and Car #18 were observed to have dislodged following Pit stops.

Following admissions to the breaches by the Team, the Stewards imposed Penalties of Fines in the sum of $3,000 and the Loss of Thirty (30) 2019 Virgin Australia Supercars Teams Championship Points on Racing Team (Aust) Pty Ltd for each of two breaches of the Article 5.11.2 of the Event Supplementary Regulations, one in connection with Car #12, the other Car #17, during the Pit Stops for those Cars – brake lock mechanism not engaged at all times during Pit Stop before Car was returned to the ground.