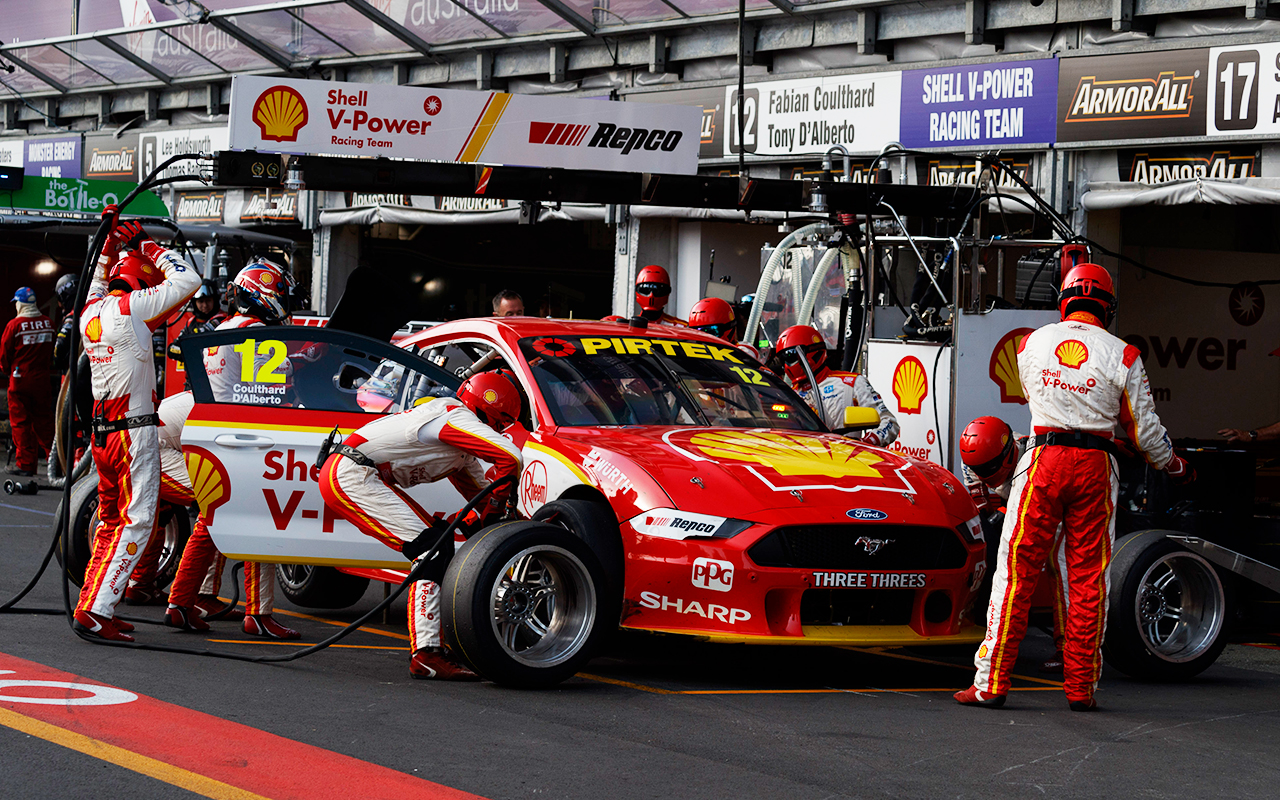 Fabian Coulthard’s hopes of bouncing back from his Bathurst blues with a strong Vodafone Gold Coast 600 were dashed due to a series of misfortunes, including a Sunday sensor failure.

Coulthard qualified sixth on Saturday and finished ninth; a fine recovery after co-driver Tony D’Alberto was knocked back to last due to a clash with Jack Perkins on lap eight.

Sunday though had the #12 Mustang starting 15th, with Coulthard one of many to suffer thanks to the red flag in qualifying brought about by teammate Scott McLaughlin’s accident.

Coulthard started the Sunday encounter, narrowly avoiding the carnage to be ninth by the end of the first lap; holding that place until pitting to hand over to D’Alberto on lap 22.

It was not to be a regular stop, however, with the team needing to put a new engine map in the car – via plugging a laptop into the ECU – due to a sensor failure.

While the team had permission to have its linelocker switch off as part of its planned engine shutdown, an incorrectly timed restart led to the car’s rear-wheels spinning, earning a penalty.

“We had a lambda sensor go out,” explained Shell V-Power Racing boss Ryan Story, referring to the exhaust-mounted sensor that determines the air/fuel ratio being delivered to the engine.

“Under the new lambda rule that we have this year to run at a nine-zero [0.90 maximum air/fuel ratio], basically when the closed-loop system fails, you're relying on the base map.

“But if there's an issue with the sensor the car will run rich rather than at a specific number we try and target. So we got permission to put a new map in the car.

“When you plug into the car, before you can send anything to the car you have to wait for the car to acknowledge that you're connected.

“That can sometimes take a little bit of time, so we lost a lot of time through that process.

“And unfortunately through the driver change we had some issues getting the secondary belts in place, which meant the car was in the air and it was started before it was dropped.

“That wasn't the plan. The intent was to have the car on the ground when it was restarted."

D’Alberto was soon awarded a 15-second time penalty for the spinning wheels, to be served at the second pitstop.

Coulthard returned to the wheel for the final stint and brought it home 11th; the last car on the lead lap.

Without a top six result since Townsville in early July, a full 10 races ago, Coulthard admitted it’s been hard to remain positive.

“It's tough at times, that's the nature of the business, I'm my biggest own critic, I want to do well and succeed,” he said.

“I know we can do it, but for whatever reason the last couple of races we haven't been able to do it.

“We'll work hard, we'll continue to come back, push just as hard as we always do and try and come away with a few trophies at the end of the year.”