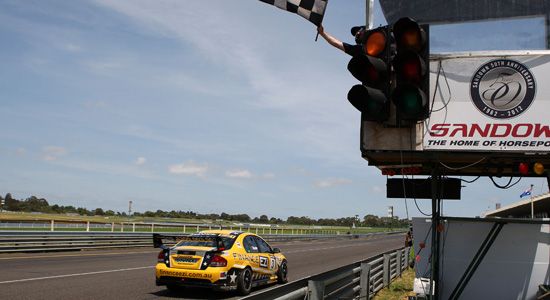 The pair of 17-year-olds are firmly in the frame to drive for DJR in next year’s Dunlop Series, which is set to return to the series having not competed in the development category since 2006.

Both Hunter and Heimgartner are turning laps of the Ipswich circuit in the car used by James Moffat in the second part of this year’s V8 Supercars Championship.

They are receiving driver tuition from Paul Morris over the course of the day.

“They’re two very mature young guys. I’m pretty sure they’d do a solid job next year in the Dunlop Series.

“Today is more about them doing some observation laps at this point in time.

“Having some young guys in our team would be good.

“We could cement these young kids into the team and they could have a future with DJR.”

DJR announced plans last month that they would run a pair of Falcons under the 'Dick Johnson Racing Junior Development Program' banner in the Dunlop Series in 2013.

Should DJR run both Heimgartner and Hunter in two cars in next year’s Dunlop Series they would far and away be the youngest two-car driver line-up in V8 Supercar history.

Heimgartner, 17, drove for Team Kiwi in this year’s Porsche City Index Carrera Cup and was a finalist on the Shannons Supercar Showdown TV reality program.

He’s also been racing in the New Zealand V8 SuperTourer series and recently completed the Porsche Motorsport International Scholarship in Italy with a drive in next year’s Porsche Supercup being awarded to the winner.

Hunter, 17, won this year’s V8 Touring Car Series for ex-V8 Supercars, which runs as part of the Shannons Nationals.

Maurie Pickering’s Finance-Ezi sponsored Hunter for the second half of the season – Pickering was recently announced as now being a board member of DJR.

The opening round of the 2013 Dunlop Series will take place at the Clipsal 500 Adelaide from February 28-March 3.