Penske Racing president Tim Cindric believes DJR Team Penske has cut its deficit in half and wants to see continuity in results from here.

Driver Scott Pye was a standout performer in Saturday's race at the SKYCITY Triple Crown Darwin with his fourth place finish, earning the team's third top 10 result in as many races and equaling his own best finish in a V8 Supercar (he scored fourth at Queensland Raceway with DJR last year).

Sunday's race was a little tougher, but Pye's sixth, fourth and 16th place finishes in Darwin mark the team's best weekend to date.

And with Marcos Ambrose back in the car for co-driver running on Friday, the team is on its way and improving with the enduros on the horizon.

Cindric, who was back from America after missing the last round, was pleased to see the team back up Pye's top 10 Winton finish and believes there is a new level of belief within the team.

"We followed up Winton with a solid result - this weekend we had the pace, I think," Cindric told v8supercars.com.au post-race on Sunday in Darwin.

"Today didn't go as well as we wanted to - [Pye] obviously got off to a bad start, lost about 10 spots at the start - but I think if that didn't happen we'd have had another top 10 result.

"So, a far cry from where we've been and I think the team is gaining the confidence that there's capability and there's potential there, we just have to execute." 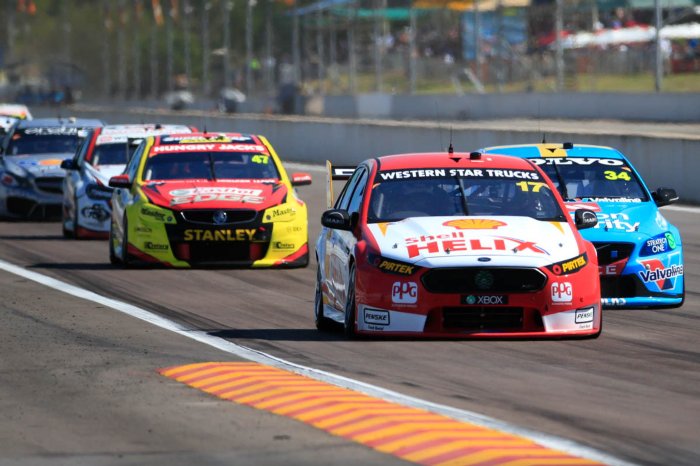 The team did well out of the box with Marcos Ambrose at the Clipsal 500, whenthe returning champ made the top 10 shootout on Sunday and finished 12th, an admirable effort for his first real hit-out with DJR Team Penske.

But Ambrose ultimately stepped out of the drivers' seat because he felt he couldn't help develop the car to where it needed to be.

Pye has now completed four events behind the wheel as the lead driver, and feltthe FG X had good pace in Darwin. Cindric agreed.

"I think everything is starting to pay off and the work we're doing to try and get ourselves further up the grid is there," the Penske boss said.

Cindric has been present at the Clipsal 500, Perth SuperSprint and SKYCITY Triple Crown this season, and explained his role as assessing the team's position and strategising for the future.

"Observing is part of what you do but you're here to make decisions, complement the team in what they do and ... understand what resources they need. I'm here to understand where we can improve."

He is hoping to return to Australia for Bathurst in October, and isunsure whether he will be back out before then.

"I think it's important to be here on a consistent basis to understand first hand not only the team, but also the series, and understand where the series is going.

"My job is to help strategise where we go in the future to be better and understand first hand what resources we need - whether it's personnel or ...execution - what gets us to the next step."

The next step for Cindric?

"Continuity in the results," he said.

"Real progress is what you want to see and if you can move that from top 10s to top five -we're not content with top 10 but that's a realistic expectation of where we can be."