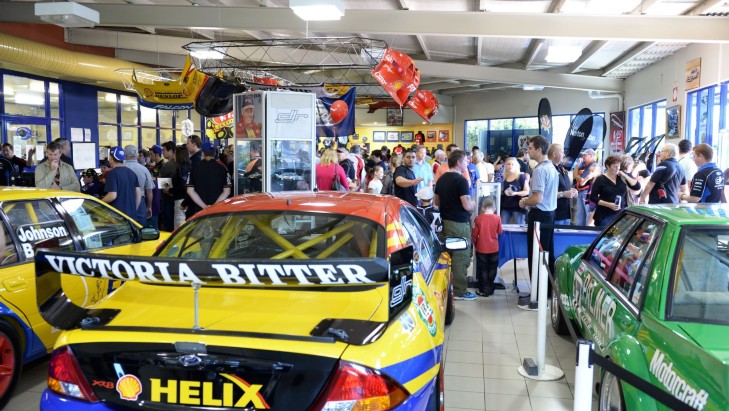 Dick Johnson Racing will throw open the doors for the fanson Sunday July 27, inviting them to an Open Day at the Stapylton workshop.

From 10am to 3pm the iconic Queensland team will treat supporters to a rare insight into the Wilson Security DJR team, with plenty of highlights for the whole family.

Together with Team Owner Dick Johnson, all 2014 drivers will be present to meet and greet the public.

Steve Johnson -who will contest the Dunlop Series at the next event in August -is returning to co-drive the famous #17 DJR Falcon with David Wall and Dunlop Series points leader Ash Walsh will return to partner good friend Scott Pye.

John Bowe will also be on hand as he and Dick head towards their 20th anniversary of the 1994 Bathurst 1000 win.

But the coolest part for hardcore fans will be the opportunity to take a tour through the team's workshop. Get up close and personal with the cars and see the team's museum and the working parts of the race cars up close. From logistics and the transporter to the fabrication shop, no stone will be left unturned. A gold coin donation gets you going.

"We have been overwhelmed by the success of our DJR Open Days and this year it promises to be bigger and better than ever!" Team Principal Dick Johnson said. "We had over 7000 people in 2013 so we are out to beat that number for sure."

Lock in Sunday July 27 at 10 Emeri Street in Stapylton, Queensland -it promises to be a great day for DJR and V8 Supercars fans.

16/07/2014
Stay In The Know
Sign up to the Virgin Australia Supercars Championship Newsletter
We use cookies to ensure that we give you the best experience on our website. If you continue to use this site we will assume that you are happy with it.Ok