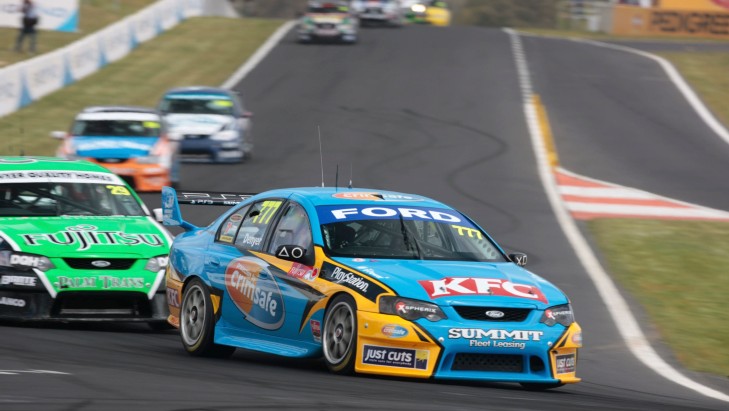 Grant Denyer believes he is in career-best form behind the wheel, and next week has the opportunity to put his skills to the test at the Supercheap Auto Bathurst 1000 in a V8 Supercar.

Denyer, 38, raced in the Dunlop Series for a number of years, but has not been part of the category since 2011. After a late call-up from Image Racing last week, the TV personality will make an unexpected return for the next round - which just happens to be Bathurst, the year's biggest race.

He had opportunity to test the Image Racing Ford Falcon FG on Monday at Winton and after completing approximately 70 laps, the team was impressed with Denyer, who races and has taken wins this year in the Australian GT Championship.

Getting back into the category wasn't something on Denyer's mind - and while he admitted to a moment's hesitation, tackling Mount Panorama was an opportunity too good to turn down.

"It wasn't really on the radar - you've got to be in a V8 Supercar all the time to be any good at it," Denyer told v8supercars.com.au.

"With my TV work and running in the Australian GT Championship, that was enough for me - but it's been going way better than I'd ever imagined.

"We've been on the podium every round in the Ferrari, I've won three races and a round so far this year, so I think I'm kind of in the driving form of my life to be honest!

"I've certainly never enjoyed it this much, as I am right now, and I think I'm driving better than I ever have, so it was kind of like a lucky leprechaun came down from a rainbow when Terry [Wyhoon at Image Racing] called me and I've got the pot of gold."

Denyer raced the Dunlop Series for a number of years and recorded four race wins, as well as a number of podium finishes.

"I was pretty proud of my achievements back then," he said. "So I think returning to the category that has been so good to be in the past, it was just too good an opportunity to say no to," he said.

While he admits to a moment of hesitation at first, Denyer is now hopeful of a top 10 finish in what is the Dunlop Series' longest race of the year, a 250km mini-enduro at Bathurst next Saturday.

The field includes nine Championship co-drivers, and two Bathurst winners in Paul Dumbrell and Paul Morris. Denyer will also be racing his GT co-driver Tony D'Alberto, who will steer with Josh Kean in one of the Brad Jones Racing Dunlop Series Commodores.

He believes the category has stepped up a notch since he last contested a round.

"I was debating whether to take the drive on, my ego was saying you're doing really well winning races in a Ferrari - I don't want to look like an idiot in the Dunlop Series!

"The category has come so far since I last drove in it, the standard is much higher - and I thought that was a terrible reason to say no. So I'm just going to go there with the attitude that this is going to be a lot of fun, great opportunity with a good team, and if I can get my way into the top 10, job done. But it won't be anything more spectacular than that."

The V8 Supercar is a big change from his GT car, which is less physical and has more creature comforts. Given the unique challenge of the V8 Supercar, Denyer isn't too ambitious with his expectations - but couldn't hold back his excitement for racing at Bathurst.

"We're not going to be right at the front, I'm just not in these cars regularly enough to be able to do that - but if we could sneak into the top 10, I'd be mega proud of that," he said.

"I think any day you're doing a lap around Mount Panorama you're having a darn good day to be there in a V8 Supercar again is the stuff of dreams."