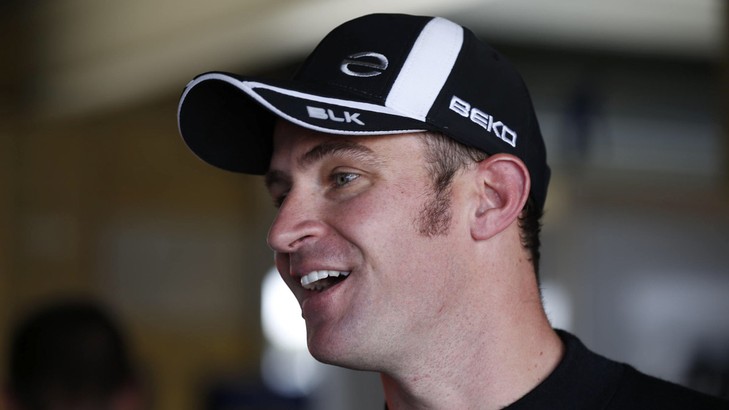 Will Davison has refused to read too much into setting the fastest time in the opening practice session for the Winton 400, but has welcomed a further indication his Erebus Mercedes-Benz E63 AMG is on the pace.

Davison said the condition of the track was unpredictable because of sealant used to repair various sections of the surface.

The sealant stuck to tyres and the floor of garages and also sprayed on to the inner guards of the race cars.

“Two thirds of every corner has got a lot of grip and the other third has got none,” Davison said. “There is not much grip then there is massive grip entry to mid and then no grip on throttle.

“It is very interesting, very hard to make chassis changes. In the high grip the car feels good and in the low grip the car is sliding a lot. There is a lot of feedback through the steering wheel because there is a build-up of rubber and you are running over it.”

“I am not getting carried away, but the car is not doing anything wrong,” said Davison, who finished a strong fourth in the 200km Race Six at last weekend’s Tyrepower Tasmania 400. “It actually feels quite nice.”

“I am not reading too much into it because it is practice one. But it’s not like we changed tyres at the end of the session and went to the top. We ran the same tyres the whole session and we were quick from the start to the finish.”

Will Davison  ›
15' Erebus Motorsport ›
2014 Winton 400  ›
Stay In The Know
Sign up to the Virgin Australia Supercars Championship Newsletter
We use cookies to ensure that we give you the best experience on our website. If you continue to use this site we will assume that you are happy with it.Ok