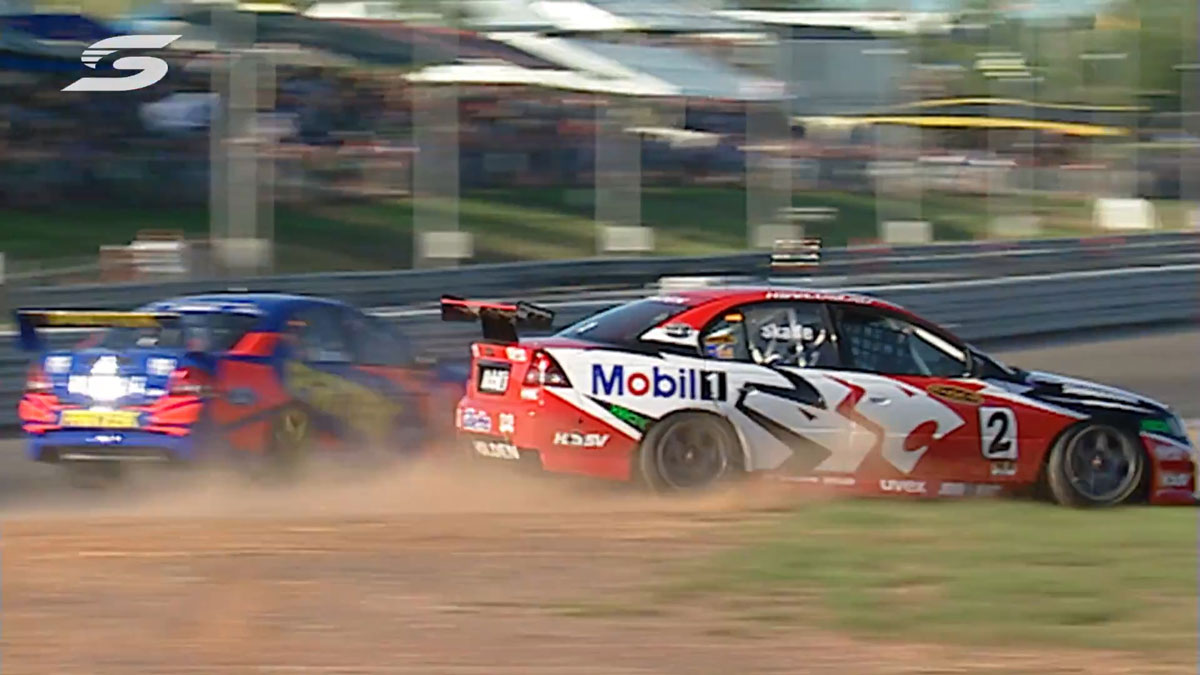 For over two decades, Darwin’s Hidden Valley Raceway has served up its fair share of dramatic Supercars action.

From surprise winners to nail-biting finishes and multi-car crashes, the Top End has seen it all. But for pure drama, one moment stands above the rest.

The opening race in 2004 was for the most part unremarkable. Holden Racing Team spearhead Mark Skaife got the jump at the start of the 17-lap Saturday sprint and looked largely unbeatable.

Arch rival Marcos Ambrose closed him down in the dying laps but, with a championship lead to protect, logic dictated he’d follow the Commodore to the flag.

Skaife took the usual racing line into the final two corners and, when he went to take the second apex, the Stone Brothers Racing Ford was already there.

The two titans collided, pushing Skaife off and damaging the Commodore’s steering. Ambrose headed for the line, only for teammate Russell Ingall to charge through and steal the win.

"The gap was there and I went for it," said Ambrose following the race. "As the championship leader I probably should not have done it, but I just went on instinct.

"I carried a lot of speed into the corner and there was a big gap there. He turned down and that's when contact was made.

"I am sure both of us could have gone to the line without any drama.”

It was the latest salvo in a growing war between Skaife and Ambrose, after the Ford star had dethroned the five-time champion the previous year.

Skaife’s reply to the Hidden Valley incident was concise, declaring in the press conference that "every dog has his day".

HRT requested the stewards review the incident, but ultimately no action was taken.

"It's not a move I thought he would make given his lead in the championship," Skaife added. "I saw him on the inside but just didn't think he would do it."

The man left smiling was Ingall, who by leading home Todd Kelly and a recovering Ambrose, added a sixth Darwin win to the tally he’d started at the very first event in 1998.

"Marcos' move was a brilliant one - I wish I'd have made it,” he said. “There was a big gap left for him and he took it.

“It think it's great that the championship leader is prepared to make such a move on the final corner of the last lap.”

The weekend’s drama though wasn’t finished there, as Ambrose again showed his aggression at the opening corner of the second heat, this time colliding with Ingall himself.

That clash paved the way for the Kelly brothers to split the Sunday wins, Rick taking the first and Todd the second, leaving the latter with the round honours.

“What do you do?” was Ingall’s response to the Sunday incident. “You can kick and scream and carry on like a child, or you can cop it. We all make mistakes.”

Ambrose lost the battle but would win the war, going on to take his second Supercars title in a PIRTEK Falcon that has recently been restored by SBR founders Ross and Jimmy Stone.

The BetEasy Darwin Triple Crown will be broadcast live on 10, Fox Sports and streaming on Kayo this weekend.