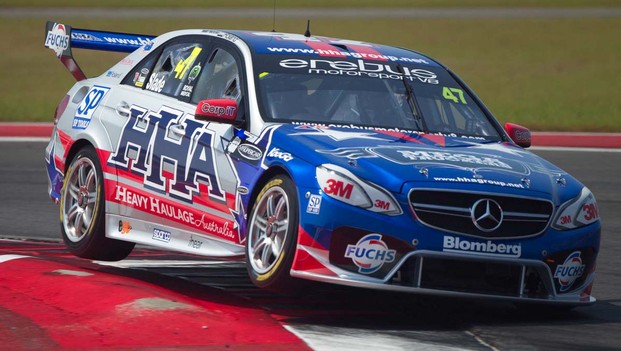 The team’s E63 AMGs have hadtrouble throughout the season with engine cooling, air intake temperature andover-heating electric power steering – an issue which became obvious in theheat wave conditions experienced in the last round of the championship at Circuitof the Americas in Texas.

And while definite progresswas made, transferring from 15 degrees ambient at Morgan Park to around doublethat in Darwin while running on Hidden Valley’s 1.1km straight will quicklyshow if the Benzes are narrowing the performance gap to the Ford Falcons,Holden Commodores and fellow Car of the Future newcomers, the Nissan Altimas.

“As far as sorting solutionsto problems the day was pretty successful,” reported Slade, driver of the #47Heavy Haulage Australia Benz.

“We managed to fix the powersteering issue I think. Time will tell when we get to Darwin because we know itis going to be a hell of a lot hotter up there. The other cars tried a bit ofdifferent stuff as well and we managed to fix a few dramas.

“Performance-wise we alsotried a few things with the engine and again time will tell to see exactly whatthe results are of that. The trouble is the Morgan Park track doesn’t highlightthe problems we have with the engines because it doesn’t have a big longstraight. But it is definitely a step in the right direction.”

The upgrades tested thisweek, including an airbox evolution and revised cooling package, were at leastpartly the result of a round of post-Austin video and phone hook-ups betweenErebus and performance partner HWA in Germany.

It follows on from Erebusabandoning drive-by-wire throttle technology and reverting to a cable-operatedeight butterfly inlet manifold earlier in the year. That move still hasn’tovercome power delivery issues of the engine, nor bridged a fuel consumptiongap to the established Ford and Holden (Chev) engines.

The critical nature of theoverheating is obvious in qualifying where the Benzes have not blanked offradiators to aid single lap speed.

“I am hopeful we areentering the final stages of the cooling package,” said Erebus CEO RyanMaddison. “I don’t think this is the absolute fix but I think we are gettingmuch closer.”

In effect, because Erebus’V8 project only really got rolling last September, 2013 has been a very publictesting program for the team. It has been hurt by the cost containment-drivencut in test days from 10 to six. Erebus has three test days left this year plusa rookie test day for Engel.

Tim Slade  ›
15' Erebus Motorsport ›
2013 SKYCITY Triple Crown  ›
Stay In The Know
Sign up to the Virgin Australia Supercars Championship Newsletter
This website uses cookies to improve your user experience. By continuing, you will be providing your consent to our use of cookies.Ok