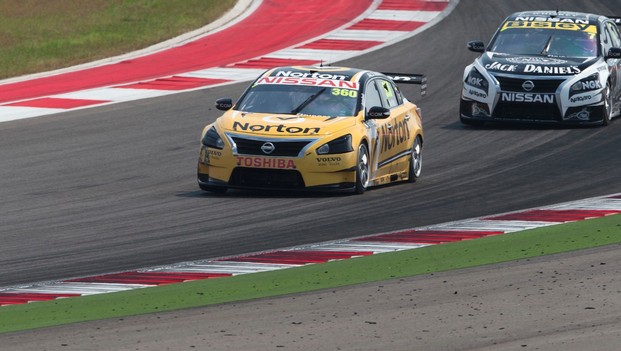 Norton 360 Racing will be tested at Hidden Valley Raceway next weekend – taking on the heat of Darwin in what is a special event for one of the team’s drivers.

Michael Caruso heads to Darwin as a former race winner at the ‘Top End’, having claimed his first V8 Supercars career race win at Hidden Valley Raceway in 2009 (read what Caruso told v8supercars.com.au last week about the victory here).

Caruso says the circuit holds a special place in his heart, and while he acknowledges repeating that performance in the new Nissan Altimas will be a difficult task, he hopes his strong form at the track in the past will put him in good stead.

“We know that the track is very hard on tyres, so it will be interesting to see how the regulations with the soft and the hard tyre combining over the weekend plays out. It will give us a chance to see how we can use strategy to get the most out of the car.

“At this stage of the development process of the Altimas, it’s hard to have an expectation for Darwin because from track to track, our cars are different speeds relative to the field.

“I have no doubt that we’re making improvements each event, but where that puts us, it’s going to be hard to judge.”

Caruso’s teammate James Moffat, driver of the #360 Norton 360 Altima, is also looking to continue his strong form in the V8 Supercars Championship.

The Victorian currently sits 13th in the Championship having scored six top 10 finishes so far in 2013.

Moffat is a fan of the Hidden Valley layout and with the meeting set to feature both hard and soft compound tyres, he says tyre life in the hot Darwin conditions will be a huge factor next weekend.

“Darwin is always a tough race because of the heat, both physically and on the cars,” Moffat said.

“It’s always a great event to go to. The City of Darwin always gets behind the race in Hidden Valley. It’s a great track that is characterised by a very long front straight.

“Fortunately, we’re coming off a really hot race in Texas where no one anticipated that it would as hot as it was over there. Darwin shouldn’t be as much of a shock to the system.

“The races up there are tough because of the heat that you experience inside the car, but I’m looking forward to getting up there – It’s a similar track surface to what we had in Perth, and we had a pretty speedy Norton 360 Altima there.

The SKYCITY Triple Crown will be held on June 14-16, with four practice sessions on Friday, followed by the return of the 60/60 Super Sprint format on Saturday. Two qualifying sessions and two races will be run on Sunday.

Michael Caruso  ›
15' Nissan Motorsport ›
2013 SKYCITY Triple Crown  ›
Stay In The Know
Sign up to the Virgin Australia Supercars Championship Newsletter
We use cookies to ensure that we give you the best experience on our website. If you continue to use this site we will assume that you are happy with it.Ok