Dane to Whincup: 'you lost us the race'

Dane to Whincup: ‘you lost us the race’

Dane to Whincup: 'you lost us the race' 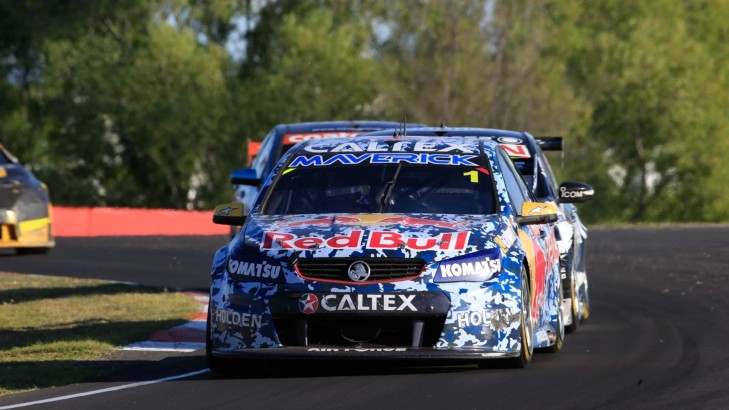 Red Bull team owner Roland Dane has told star driver Jamie Whincup he is responsible for the team not winning the Supercheap Auto Bathurst 1000 because he disobeyed team orders to save fuel in the late stages of yesterday's dramatic race.

"I said to Jamie when he got out of the car; he has won a lot of races for us and he has now lost a race for us that is one of the biggest ones," Dane told v8supercars.com.au.

Dane watched on as Whincup's engineer David Cauchi and then RBRA team manager Mark Dutton demanded with increasing stridency that Whincup ease the pace of his Holden Commodore VF. But instead, he sprinted away from second placed Chaz Mostert's FPR Falcon after the final safety car period.

Whincup elected to ignore the instructions in the hope of yet another safety car to help him get home for the win.

Instead the car ran out of fuel on the last lap and he only finished fifth, with Mostert taking an incredible last to first win with veteran co-driver Paul Morris.

"One hundred per cent that was against our advice and that's just not clever," said Dane of Whincup's strategy. "And that is disappointing that we didn't manage the fuel as well as we could have done."

That result meant Triple Eight Race Engineering, which races as Red Bull, missed the podium at Bathurst for only the second time in a decade.

And while he singled out Whincup for criticism, Dane admitted the team's results were caused by wider issues than his five-time champion's disobedience.

"It is not only him, it is the rest of us as well. We win or lose collectively as a team and there were other aspects we didn't do well enough and will have to improve.

"We were fast enough to have a one-two and it's our fault we didn't."

Dane pointed to the new structure at RBRA in 2014, which has seen Dutton move into the team manger's role and Cauchi take over as Whincup's engineer, as being a potential contributor to its issues.

"We are trying to find our feet in a new structural environment in the team and unfortunately we still have some miles to do to get it right," he admitted.

"That's part of learning and we will be stronger as a result of it. The guys are gutted, we are very good at self-examination and there will be no shortage of that for all us - collectively and individually."

Whincup was unapologetic about running his own strategy in defiance of team orders, even though they backfired on him.

"There were two options in my head; conserve the amount of fuel they wanted me to conserve and run second, or go all out and try and win the race. We went all out and ended up finishing fifth.

"I thought maybe there would be a safety car, or something might happen to Chaz and I could use the buffer, or we could have more fuel than calculated. Who knows.

"But at the end of the day there's no points looking at all these ifs and buts. We started 23rd, finished fifth and put on a good show and that is what it is all about."