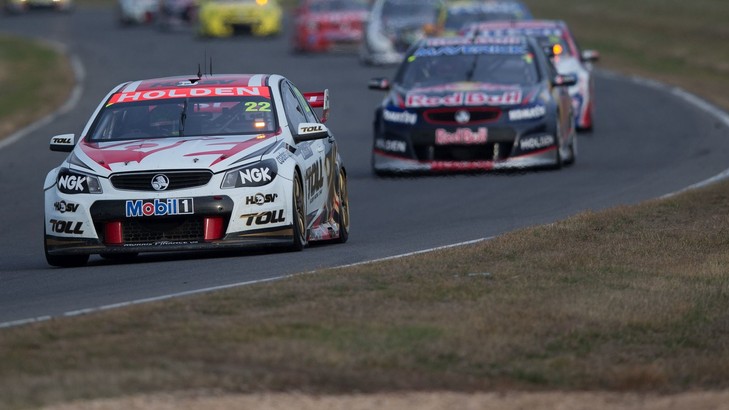 HRT up, FPR down – that’s the prediction from Red Bull Racing Australia team boss Roland Dane ahead of the 2014 V8 Supercars season.

“Some of the people last year who didn’t have a good run, including the other unmentionable Holden team that and I’m not going to name … I think they’ll have a better one this year.

“I think probably FPR won’t go as well because they’ll have one top line driver instead of two – not to discourage the up-an-coming second driver in Chaz (Mostert, replacing Will Davison), he just hasn’t got the miles under his belt.

“So I think there’s going to be a few changes out there, but I think you’ll see us hopefully right up there.”

A fierce rivalry has built between the three big name teams, after on-track and off-track controversy in 2013, which saw the Championship go down to the wire between RBRA and Ford Pepsi Max Crew.

But it was Adrian Burgess’ switch from RBRA to the Holden Racing Team that enraged Dane, who used the term “motor racing mercenary” to describe the highly rated operator many times.

When talking about the recent promotions within his team, which have seen Championship-winning engineer Mark Dutton shifting to the team manager role and Craig Lowndes’ engineer Jeromy Moore double as chief designer, Dane said, “I made a mistake last time”.

But Burgess, now at the helm of the other factory Holden operation, laughed about the rivalry.

“I’m not trying to rev anyone up!” Burgess told v8supercars.com.au.

“I had a great time there, no problem with that – but now I work for someone else and my job here is to win.

“Take what you want of it, I’m not bothered about them anymore, I need to focus on this and the job here.

“To win here I need to be beating them and beating everybody else – and that’s what we want to try and achieve, it’s as simple as that.”

Adding fuel to the fire, James Courtney – who Burgess helped secure a Championship in 2010 when both were at Dick Johnson Racing – predicted chinks in the armor of the Champion Red Bull team, given its recent restructure.

“We’ve seen in past years if you put pressure on Triple Eight they do make mistakes.

“This year losing Adrian and also the way they’ve changed, whoever is in his position hasn’t been there before so there’s going to be added pressure.

“Jamie’s got a different engineer – sure they’re going to have car speed, I don’t think that’s going to be an issue, but when those high pressure situations come, how they react without having that good calm influential person there to delegate – I’ve stolen him, I’ve got my man back – so that’s when you’ll probably see them crack.”

Courtney is the only man to have beaten Whincup in the Championship in the last six years and believes 2014 is the best shot he has of wrestling that title back once again.

“It’s exciting times and I think we can do it… we’ll be going faster for Clipsal!” he said, having finished the sydney.com Test Day eighth and fifth across the two sessions.

“I don’t think the change from Will (Davison) to Chaz will be impacting our results at all,” he said.

Tickets are available to the larger than life season opener, which kicks off in a week’s time in Adelaide. The Clipsal 500 has an extensive on and off-track program to keep fans enthralled across the four days.