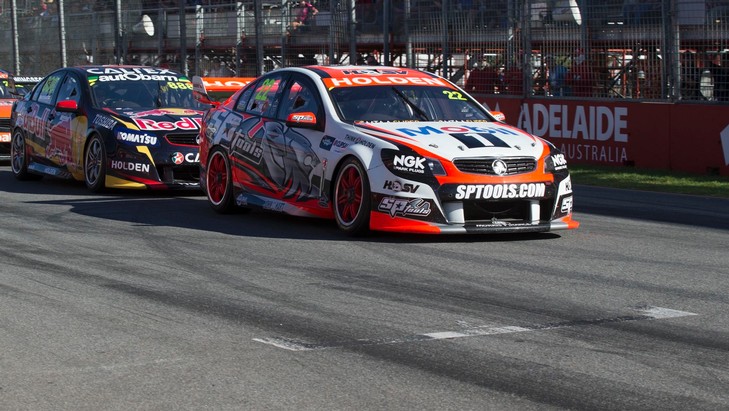 Roland Dane and Adrian Burgess have buried the hatchet – and not in each other’s back.

Instead, Dane has switched his aim to Ryan Walkinshaw, who lured Burgess away from his position as team principal at Triple Eight Race Engineering to become managing director of Walkinshaw Racing.

“I don’t need to clear the air, I don’t have a problem with Adrian,” insisted the Triple Eight team owner after he and Burgess were seen talking several times during the Clipsal 500 Adelaide meeting (can you spot them amongst the fans below?). 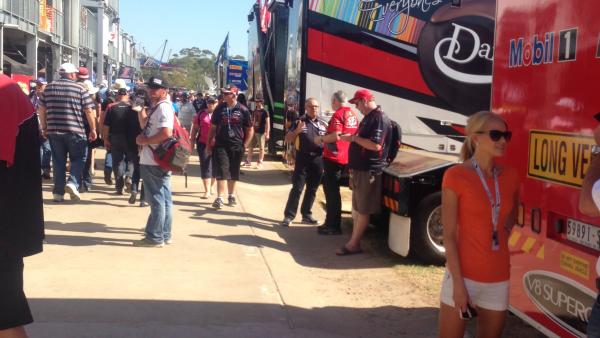 “To be honest I don’t have any time for his boss at all because his boss hasn’t got any runs on the board in motor racing yet and honestly I am not able to identify with a generation of people who wear make up.”

While Dane’s comment is clearly intended to antagonise the young Englishman, who took over the business after his father Tom’s death in December 2010, it’s more likely to give him some satisfaction.

Walkinshaw has made it clear in the past that his decision to lure Burgess away from Triple Eight had multiple purposes; strengthen his own squad, weaken his factory Holden rival and to send a message to Dane – one of the most powerful and influential individuals in V8 Supercars racing – that he would not be intimidated.

“Roland is known for liking to have a big sook about things and I am happy to let him do that,” Walkinshaw told v8supercars.com.au.

“To me that comes across as him being worried about what we are doing to get HRT back at the front and if I were him I would be worried too. If he wants to go around insulting people that's his choice, I am not going to get pulled into immature games like that.

“It’s hardly a very professional look for him, his team or his sponsors.”

Dane labelled Burgess a “motor racing mercenary” and put him on gardening leave for the balance of 2013 after the move became public last August. He released him early from his contract just before the end of the Championship.

They talked several times in Adelaide and Dane even offered his congratulations after James Courtney won Race Three in his HRT Commodore, profiting from errors made by the Triple Eight squad.

“As far as Adrian goes and the guys in the team go, we are in hot competition with each other, but I have no problem with Adrian whatsoever now and vice versa,” Dane said

Burgess said he harboured no ill will toward Dane either.

“There was never really anything to clear,” he insisted. “He did the right thing by his business. He was protecting his workfoce. I understood what went on. I am not a child. I know the environment we work in. It’s a sport, it’s a business.

“I probably would have done the same thing.

“Time will tell if we ever get back to the same relationship and friendship we had before. But I am here to win.

Burgess did admit scoring a race win in his first meeting in charge of HRT was sweetened by the fact Courtney achieved it after resisting intense pressure from the Red Bull Commodore of Triple Eight’s Craig Lowndes.

“Of course it was (sweeter),” he said. “To have Lowndesy bearing down on you for the last 20 laps… But I am motivated to win, it doesn’t matter who is on our tail, if those guys are on our tail fair enough.”

Out with Mistress, in with Brodie

New set of Wings for Hornet at Albert Park

Poll: Defining Moments at the 2013 AGP