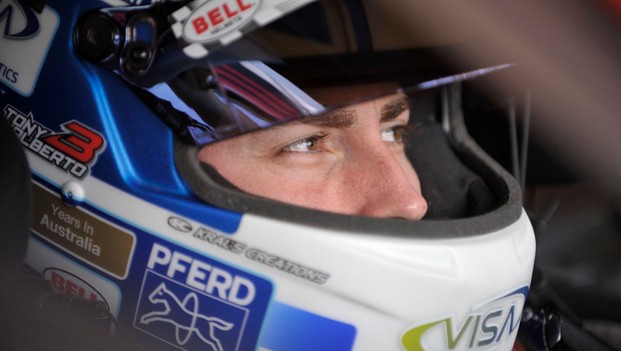 After a series of disappointing results Tony D’Alberto is determined to translate his brilliant fourth fastest qualifying effort for this afternoon’s opening 300km race of the ARMOR ALL Gold Coast 600 into a top 10 finish.

D’Alberto started the ARMOR ALL Top 10 Shootout in seventh position but his smooth and slick 1min11.2352 lap in the D’Alberto Racing HIFLEX Holden Commodore VF was top of the pile until the Holden Racing Team’s James Courtney and Garth Tander and eventual pole sitter Craig Lowndes in the Red Bull Commodore, went faster.

It was huge letdown for them after D‘Alberto’s front row qualifying effort and fourth place at Winton in August and excellent sixth place finish in Townsville.

“I just want to have a clean race where we have no mechanical problems,” D’Alberto said. “I am sure the car is fast enough, Jonny is fast enough and I think we need the top 10 at a minimum.

“I must like street circuits because we always seem to creep up the grid at them,” he added. “I think they should line all the circuits with concrete.

Lowndes, who will partner with Warren Luff, was still under investigation from V8 Stewards for an incident with Will Davison in qualifying when he set the fastest top 10 time.

He knows he has a big chance to take points from his Championship rival and teammate Jamie Whincup, who starts 25th, as well as FPR Pepsi Max drivers Mark Winterbottom and Will Davison, who qualified 14th and 21st respectively.

“This has always been my Achilles’ Heel circuit, so to have an opportunity like we have is fantastic,” Lowndes said.

“I know Jamie is bitterly disappointed with where he ended up, and he will come back through the field and you have Frosty and Will further back too.

“It is a perfect opportunity for us to get some points back from him, if not close it right back down.”

Whincup and Winterbottom Take the Blame

Qualifying and Shootout: Lap by Lap

Davison "Absolutely" in the Championship Race

Tony D'Alberto  ›
15' Team CoolDrive ›
2013 Armor All Gold Coast 600  ›
Stay In The Know
Sign up to the Virgin Australia Supercars Championship Newsletter
We use cookies to ensure that we give you the best experience on our website. If you continue to use this site we will assume that you are happy with it.Ok