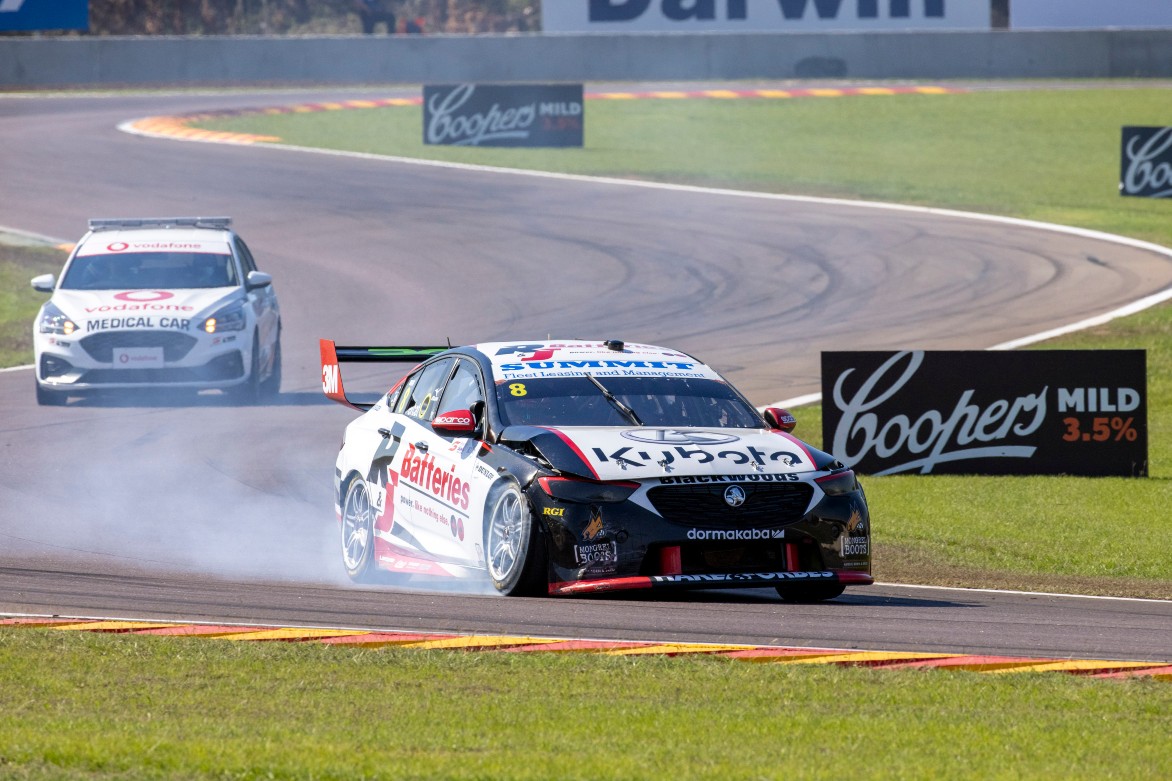 Race 25 at The Bend Motorsport Park, which Supercars.com nominated as the best race of the season, was just one race to feature several eye-catching altercations.

However, it wasn't alone in producing drama, with the likes of Darwin, Townsville and Bathurst also playing host to some heart-stopping flashpoints.

As the countdown to the 2021 season continues, Supercars.com has compiled its first collection of 2020's high-octane moments.

Check out Part 2 of the 2020 season's most dramatic and chaotic incidents.

Erebus and Team 18 butted heads in Adelaide, with David Reynolds spinning team-mate Anton De Pasquale after a lunge on Mark Winterbottom. With nowhere to go, Scott Pye slammed into the #99, triggering a Safety Car.

It had been a wild run for Shane van Gisbergen, who was fighting back following a fuel stop error by his team. However, a dramatic suspension failure late on ruined his brave podium charge.

The Brad Jones Racing garages welcomed two damaged cars after the first lap in Darwin after Nick Percat and Todd Hazelwood came together, with the #8 turned into the #14 following contact with Shane van Gisbergen.

Fighting over seventh place, Nick Percat and Chaz Mostert came to blows several times before the #8 was sent into the grass at Turn 1. Mostert was penalised and slumped to 18th, while Percat limped to 13th.

Cameron Waters was forced into the garage after an ambitious move on Jamie Whincup, who was exiting pit lane, went wrong at Turn 1.

SVG's bizarre trip into the gravel (The Bend, Practice 2)

Cruising to a quick time following two fast sectors, Shane van Gisbergen locked the right front heavily and careened into the gravel trap. The error came out of nowhere, and ruined not only the lap, but a set of tyres.

One of the most dramatic moments of the season occurred between two title combatants as Jamie Whincup and Scott McLaughlin came to blows at Tailem Bend. It kicked off a chain reaction of drama amid a chaotic race.

Davison spins Jones at The Bend (The Bend, Race 25)

Amid the chaos was a collision between Alex Davison and Macauley Jones, with the Team Sydney veteran tapping the CoolDrive Commodore into a spin.

Jordan Boys had a weekend to forget at Bathurst, with a locked right-front seeing the rookie slam the #14 into the tyre wall at Hell Corner during Friday practice.

In one of the biggest hits of the season, Jake Kostecki crunched the #34 Matt Stone Racing entry into the concrete entering the Dipper midway through qualifying at Bathurst, triggering a red flag.

This was a moment very few saw coming, as Jamie Whincup crashed out of the Great Race trying to clear Erebus young gun Brodie Kostecki. The #888 was out on the spot, and the Safety Car was deployed.

There was more intra-team misery for Brad Jones Racing, this time with Jack Smith sent spinning into the Murray's Corner sand following contact with Macauley Jones.