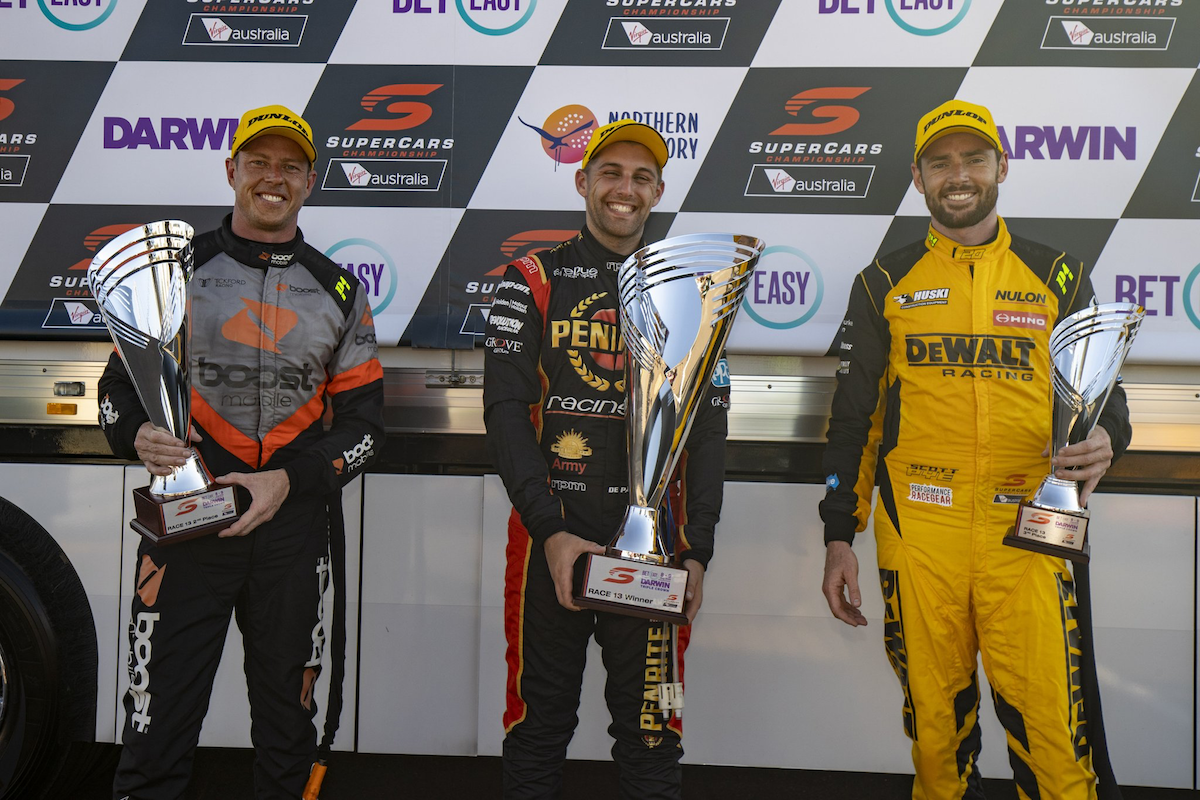 James Courtney’s rollercoaster 2020 took another turn with a podium finish in the opening race at the BetEasy Darwin Triple Crown.

After nine years at what is now Walkinshaw Andretti United, 2010 Supercars champion Courtney moved to Team Sydney this year only to split with the squad after one event.

Absent from Albert Park, which was ultimately cancelled due to COVID-19, Courtney then returned upon the resumption of racing with Tickford in unusual circumstances.

An opportunity arose at the four-car squad for Courtney and backer Boost Mobile after the withdrawal of Milwaukee and 23Red Racing left Will Davison out of a drive.

Courtney finished second in today’s race behind Anton De Pasquale and was greeted for the post-race interview by television reporter Riana Crehan, who is the wife of Davison.

Crehan and Davison both made somewhat of a return today, joining the broadcast at the circuit and from Ten’s Brisbane studio respectively having been sidelined since Albert Park.

Courtney was clearly emotional during the television interview, telling Crehan that “‘I feel for Will and his whole position, hopefully this helps out a little’.

Asked in the press conference about his rollercoaster year, Courtney added: “It’s been pretty full-on for a lot of reasons. I’m not going to lie, I got a bit emotional [after the race].

“I thought I was going to get on the podium last round, but Scotty got me on the line.

“It’s been well written about what’s been going on.

“I think I got a little emotional because I was looking at Riana and I know the emotion of her and Will and what’s going on, because I’ve been on that side of the fence.

“It all just came out. I probably didn’t come across making a lot of sense on TV at the time, but I feel for them and their position.

“But equally I’m very, very happy with the result first of all for Boost Mobile, Peter Adderton and Jason Haynes and all the guys there that have put a lot of faith in me, and also Tickford.

“There’s been a lot going on and it was good to have that release.

“I’m the exact opposite to Anton, I’m the guy going crazy and crying and all that sort of stuff, I can’t really hide my emotion and we’ll celebrate this one pretty hard.”

Courtney’s day in Darwin was also up and down, crashing out of Practice 2 before going on to qualify eighth.

He and De Pasquale both went for glory in the race, running soft tyres in both stints while many of the front-runners saved theirs for Sunday.

The pair escaped a chaotic pitlane during an early Safety Car and were separated by less than a second at the chequered flag.

“On the restart when [Jamie] Whincup was pushing me I was actually catching Anton quite a bit as we were bump-drafting,” said Courtney of his battle with De Pasquale.

“It’s hard to follow here with the way the cars are getting now and the heat coming off the car in front.

“Unless Anton made a mistake it was going to be hard to get past him and with the calibre of driver he is, he kept his nose clean.

“It probably didn’t look that exciting, but both of us were battling pretty hard at the end there. I think my fastest lap was the second-last one trying to hustle to get past Anton.

“It was quite surprising the way the tyre held in there. It was a good race. Pitlane was nuts, Whincup was driving people into the fence, there was plenty going on…”