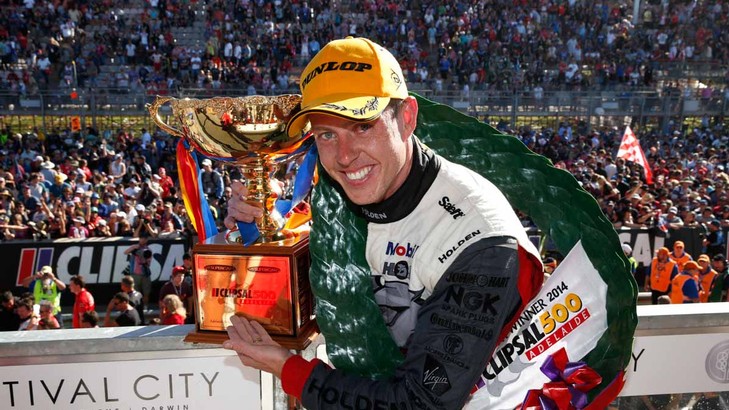 James Courtney has held on to become the 2014 Clipsal 500 Adelaide Champion after an extraordinary, carnage-filled 250km race.

Courtney and Craig Lowndes’ battle was within 10ths of a second in the dying laps, but it was Holden Racing Team to lead home Red Bull Racing Australia in a race that saw action at every turn. Lowndes even made contact at turn eight on the final lap of the time certain race, he was pushing so hard.

“Man, that felt good!” Courtney said getting out of the car.

“We knew we had good car speed, but the race was crazy… We didn’t get it gifted, we had to pass a few guys and work pretty hard.”

Shane van Gisbergen started from ARMOR ALL Pole Position, but was handed a pit lane drive-through penalty after it was deemed he incorrectly managed a Safety Car restart.

Jason Bright was involved in a huge incident early in the race – click here for more information.

And Jamie Whincup had a race to forget, also enduring a pit lane drive through after it was deemed the car controller (who stands at the front of the car during a stop, to ensure it is completed safely) touched the damaged car while completing a pit stop.

Fighting hard to carve back through the field, Whincup went in hot on a pass on Michael Caruso, resulting in steering damage and issues with Caruso’s car as well.

Only 10 cars finished on the lead lap, as one by one they dropped away in the race to the finish.

Nick Percat looked strong in the final stint, but hit the wall at turn eight in the closing laps.

He wasn’t the first – Will Davison in his Mercedes AMG went in early, a hard hit.

Mark Winterbottom was 12th, Garth Tander 13th after damage from the Bright incident, Whincup credited as 15th and Percat the first of the DNFs, with Scott McLaughlin also failing to finish after mechanical issues late in the race with his Volvo S60.

Courtney’s team had been at the circuit into the early hours of the morning after his door was ripped off in yesterday’s race. He was docked 25 points for the incident, which also involved Scott Pye and Lee Holdsworth.

Lowndes leads the Championship results ahead of Coulthard – click here for the pointscore.

More to come at v8supercars.com.au.