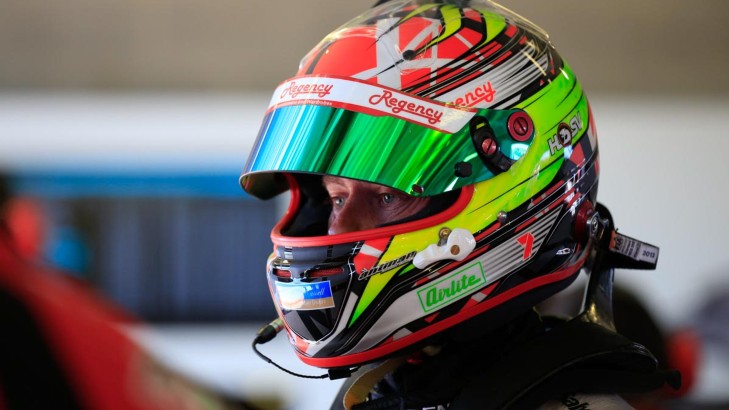 Courtney was speaking after Dane threatened to protest and prevent car 22 from running in yesterday's Top 10 Shootout -the most recent in a series of conflicts that intensified when Adrian Burgess was poached from Red Bull to run HRT for 2014.

After the sister HRT Commodore of Garth Tander/Warren Luff was crashed in practice, and deemed irreparable, HRT believed the Courtney/Greg Murphy car would be elevated into the shootout after qualifying 11th.

However, fierce competitor Dane threatened to lodge an official protest if Courtney was able to challenge for pole position, as it was not in-line with the rules.

The HRT star said Dane should rightfully be worried about the factory Holden team challenging for the win.

"I suppose when he focuses that much on us, it's a positive for us that he's worried and can see we're coming for him and his easy days are over - so he can enjoy them while he can," Courtney told v8supercars.com.au.

"In the end we're a show business, we're here to entertain the fans. They pay to come and see a Top 10 Shootout and it's just disappointing that someone thinks they're better than the sport, flexes their muscles and deprives the fans of what they want to see.

"I'm not entirely sure of everything that went on, but one thing he's entitled to is an opinion - look, he can do what he wants."

Courtney is completely confident he and he Murphy can deliver from 10th on the grid today.

"This place is pretty strange in that you don't have to have the fastest car to win here -it's all about a good, comfortable, consistent car and strategy," Courtney said.

"I think we've got the right team -the guys are really good on the strategy... our preparation is second to none.

"The guys have been working so hard and I'm still as confident going into the race as what I was a week ago ... you pretty much wipe everything that's happened until now because once the race starts it's a whole new ball game."

Despite missing the shootout -in a qualifying session where competitors smashed the lap record around Mount Panorama - Courtney believes they have strong pace.

The #22 suffered issues with the transaxle, and the team did a quick gearbox change in the lead-up to the qualifying session on Friday, which left them on the back foot.

"We rolled out with a car that wasn't that good ... it was just bit of a shambles ... We've been right up there all weekend -so that's why it would've been good to get into the shootout and show that. But look in the end 1000km race plenty of distance to go.

"Qualifying is pretty much irrelevant for a 1000km race. [The shootout] was all about flexing muscle and unfortunately we have to wait and flex ours!

"But the biggest disappointment is the mess of car #2. Garth lifts here and does a sensational job every year so I'm just gutted for those guys on the other side of the garage. So Murph and I have the whole weight of HRT on our shoulders, so we'll be good."

With Murphy having earned four Bathurst wins, Tander three and stablemate Nick Percat one, Courtney admitted there was a bit of ribbing between the guys in the garage.

"Sladey [Tim Slade] and I have got nothing! They keep reminding me that I haven't won one. And then I said to Murph, I've won a Championship!

"But it's great -I couldn't pick a better bunch of blokes to work with, as a drivers group we get on really, really well.

"The engineering side as well, everyone's gelling really well - I think that's reflected in the results we're getting and the car speed that's coming on.

"It's a pretty exciting time here for everyone at HRT. Like I said, it's disappointing car #2 isn't there, but the upside is that, one, we won't have to stop or stack in safety cars, two, we'll have double the amount of mechanics with eyes on the car and focused, so it has - with every dark cloud there's a silver lining."

The V8 Supercars are on-track for a 20-minute warm up at 7.50am, with the Great Race set to start at 10.30am local time, with Kiwi Shane van Gisbergen on pole.