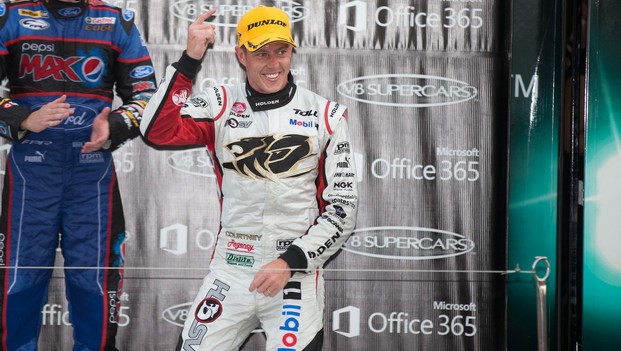 The racing future of out-of-contract factory Holden star JamesCourtney will take shape by early August after the 2010 V8 Supercars Championsits down with manager Alan Gow and reviews his driving options beyond 2013.

Gow will fly out from his UK base for the July 26-28 CoatesHire Ipswich 360 at Queensland Raceway to meet with Courtney and no doubtdiscuss his client’s possible future in in the V8 Supercars pitlane with any potentialsuitors.

“He’ll come and talk to me andtell me what options are on the table and we’ll make a decision,” Courtney toldv8supercars.com.au. “There are plenty of things out there.”

The 32-year old says he would like to continue with HRTbecause he has “unfinished business”. However, there is plenty of rumour insistinghe is more likely to depart overseas for a future in sports car racing.

“I have put in three years (atHRT) of blood, sweat and tears and arguing like hell to get things done my wayand things are starting to happen,” Courtney said. “So on one hand it wouldhave been great if we had this sort of progress earlier, but better late thannever.

”It would be sad to leave HRTwithout achieving what I set out to achieve and I am very much about achievingthe goals and moving on. If the opportunity is right it would be good to stayhere in Supercars with a competitive package.”

One fundamental impediment to Courtney continuing on withHRT or any other V8 Supercars outfit is money. Signed to HRT on a lucrativedeal (reputedly $1 million or more per annum), he has very little chance ofsecuring that sort of salary this time round because most teams are cash-strappedthanks to the fall in licence income and the cost of building new Car of theFuture racers.

Courtney’s decision on his future will play a key role indetermining how the 2013 driver silly season plays out. FPR’s Will Davison andErebus Motorsport V8’s Tim Slade are also big talents out of contract in 2013.

Courtney’s three-year contract with the team, which expiresat the end of 2013, has produced just one win (Abu Dhabi 2011) and coincidedwith the longest winless streak in the team’s history, now stretching back toBathurst 2011.

The Walkinshaw Racing Car of the Future Commodore has lackedthe pace of its Triple Eight Race Engineering rival and HRT has been goingthrough a very public suspension and engine testing program at races in a bidto catch up.

Testing last Tuesday at Winton in preparation for thisweekend’s SKYCITY Triple Crown in Darwin prompted Courtney to declare importantprogress had been made.

Earlier, Courtney had explainedthe issues he has had with the handling of his HRT CotF Commodore VF in somedetails to v8supercars.com.au: “Taking the car down this route is definitelygoing to be a lot better for me, just in the way the car delivers theinformation through the steering and the way that I feel what’s happening withthe car.

“It’s definitely a lot better with thisfront-end and I am getting a lot more information, so I am able to do what I doa lot better, whereas for me the car felt very numb previously and I couldn’treally feel what was happening and I couldn’t really take it to the limit orfeel where the limit was. But with the new changes I am getting a lot moreinformation so I am able to use it and process it the way I previously have sothe performance is getting better.”

James Courtney  ›
15' Holden Racing Team ›
2013 Coates Hire Ipswich 360  ›
Stay In The Know
Sign up to the Virgin Australia Supercars Championship Newsletter
This website uses cookies to improve your user experience. By continuing, you will be providing your consent to our use of cookies.Ok