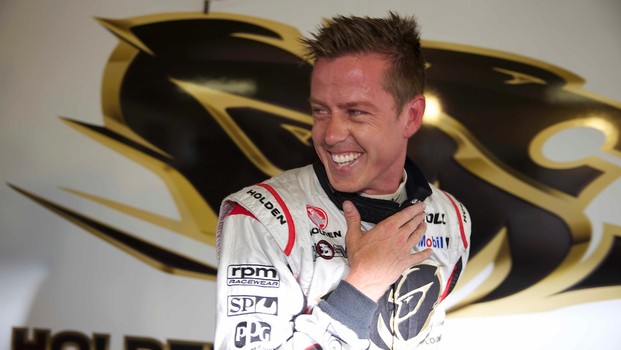 James Courtney has taken his first poleposition for the Holden Racing Team, for the first of this afternoon’s tworaces at the SKYCITY Triple Crown.

Courtney’s last start from first on the grid was atWinton in 2010 and while he claimed the Championship that year, he has had justthree career poles in V8 Supercars before today.

Between the last event – the offshoreAustin 400 – and this weekend at Hidden Valley, HRT tested at WintonRaceway, after which Courtney claimed the car was the best it had been allyear.

And that has shown this weekend, with the#22 driver on the podium yesterday and now quickest in the qualifying sessionfor Race 18.

“We found quite a few things on the testday which didn’t make the car unbelievable, it definitely was a few steps inthe right direction,” Courtney said after today’s two qualifying sessions.

“It’s good to get pole position – it’s myfirst one for HRT – so that’s nice to tick that one and reward thesesguys.

“Results for us as a team have been quitelean over the last two years, so when we’re on the podium, have pole positionand good car speed (it shows) we’re not giving up.

“We’re always swinging, fighting, punchingaway and trying to get the results.”

Courtney felt that statement was right– but he is over the moon with pole position any day.

“I’m happy with pole and will take anotherone if you’ve got it for me!

“We’ve been starting mid-field all year soany time I can get out of the craziness, I’ll be happy.”

This afternoon’s two races are 100km, andteams are required to run both the hard control tyre and soft compound tyre ineach.

“It’s going to be interesting to see whoruns which tyre and when,” Courtney said.

“The first time we ran the soft tyre on ourcar was this qualifying (session) – we didn’t use any in Practice – so we haveto make sure we keep the tyre underneath us and get a few laps out of it.”

While Courtney managed to dodge the carnageyesterday and come home in third place, his car was still damaged in the chaos atturn six.

“The car was really wounded yesterday, butwe had good speed … We’re taking results as they come.”

Teammate Garth Tander starts from 15th and 11th for this afternoon’s two races.

James Courtney  ›
15' Holden Racing Team ›
2013 SKYCITY Triple Crown  ›
Stay In The Know
Sign up to the Virgin Australia Supercars Championship Newsletter
We use cookies to ensure that we give you the best experience on our website. If you continue to use this site we will assume that you are happy with it.Ok