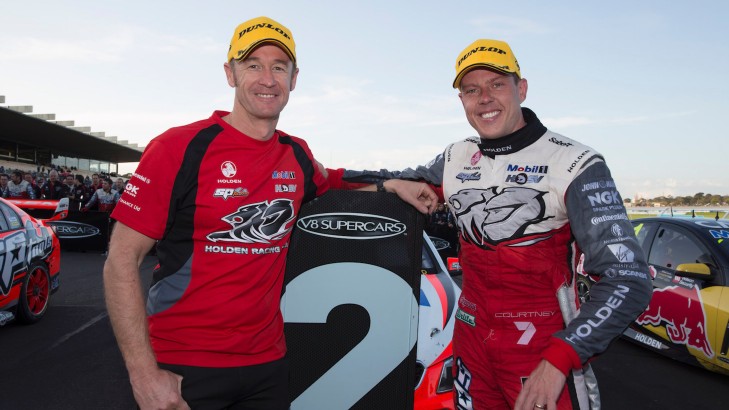 James Courtney has revealed the Holden Racing Team was pushing to get Greg Murphy back in the #22 Commodore after Russell Ingall's shock defection to Ford's Prodrive Racing Australia.

Ingall had been filling in for injured Courtney during the Pirtek Enduro Cup, but took the chance to jump in Chaz Mostert's Ford Falcon FG X for the Gold Coast event before Courtney had been cleared medically to return to driving.

Speaking to Inside Supercars last night, Courtney said Ingall was angling for the Prodrive gig at Bathurst. But now he's fit to return, Courtney promised to 'wave as he drives past' this weekend.

"I had a sneaking suspicion," Courtney said of Ingall's switch.

"I walked out of the track with 'The Muscle' on the Saturday afternoon and he was into Chris O'Toole [Prodrive team manager] that afternoon. Chaz had just taken off in a helicopter and Russell was already into him about trying to get that drive.

"Shady fellow the Muscle, but my hat goes off to him - I think he gets his 250th start this weekend, so that's a massive achievement for Russ. It's also great for the category, good back-to-back with the Ford versus Holden sort of thing.

"We'll really get a drivers' opinion of where the aero packages are at.

"It's good to bang doors with him again so I'll fire him up over the weekend and then just wave to him as I go by."

Prodrive's announcement came days before Courtney's medical clearance, but the 2010 champion knew the week after Bathurst he would need to be fit or the team would need some serious back-up.

"[Ingall] jumped the gun a little, he called it before I called mine - but he gave me a call on Monday and told me that I had to be ready because he wasn't going to be doing it, that he'd made other arrangements," Courtney said.

"The team was a little bit worried those first few days trying to scout around and get a replacement just in case - but thankfully we didn't have to call on that.

"We ere pressing pretty hard to get Murph in there and thankfully he can stay [in TV] over the weekend and I can drive."

While Courtney says he feels 100 per cent for the weekend, he admitted he may be more like 20 per cent after driving the gruelling Gold Coast circuit. However, his doctor will be on hand, and he had the opportunity to steer a race car late last week to ensure he would be comfortable.

"Suck it up and keep pressing on!" he said the plan was.

"It'll be fine, I drove a car out at Paul Morris's track on Friday - one of their school cars - banged around and had a bit of fun for a while.

"I'm 99.9 per cent sure that I'm going to be fine for the whole weekend. The thoracic surgeon will be on hand all weekend monitoring and checking me after each session."

Sitting out the Supercheap Auto Bathurst 1000 was tough for Courtney, but now he finally gets to jump back behind the wheel of a V8 Supercar and push for his first win on the Gold Coast.

"I was pushing like crazy [to drive] - I really was upset when I couldn't do Bathurst, I felt I had healed enough and was ready.

"I really wanted to do it, so really for me it was massively disappointing when we got right to that last little point and they said no ... thankfully they said yes [this time]. I was massively pushing."