Fog at Phillip Island delayed the start of Friday’s support action, but the opening Supercars session ran as scheduled, as the skies gradually cleared.

Following a spate of failures at Phillip Island last year, drivers are on the 2016-construction Dunlop tyres this season, and the harder of the two compounds this weekend.

Team-mate Fabian Coulthard completed 12 laps, pitting just after McLaughlin had limped back to the pits.

Courtney and team-mate Scott Pye spent the bulk of the session at the top, interrupted by a brief spell for Erebus Motorsport’s David Reynolds during the middle phase.

McLaughlin - back on track after his puncture - and van Gisbergen got to within a tenth of Courtney in the closing stages, the former ultimately finishing 0.0304s shy.

“It’s been great. We rolled out this morning and straight away the thing went up to the top,” Courtney said.

“The platform feels really quite stable, quite consistent in these long, loaded corners.

“With that stability through the corners it gives us drivers a lot better idea of the grip level you’ve got, so then you can use all of it.

“In previous years here the cars have been really quite nervous. I couldn’t be happier at the moment.

“I don’t know what everyone else was doing, but our car feels good.

“We still have areas we need to tune, but it’s a nice feeling to go out each weekend at different tracks with a competitive package.”

Coulthard also found time late to finish eighth, ahead of Reynolds, Garth Tander, top rookie Todd Hazelwood and the best of the Nissans in Rick Kelly. 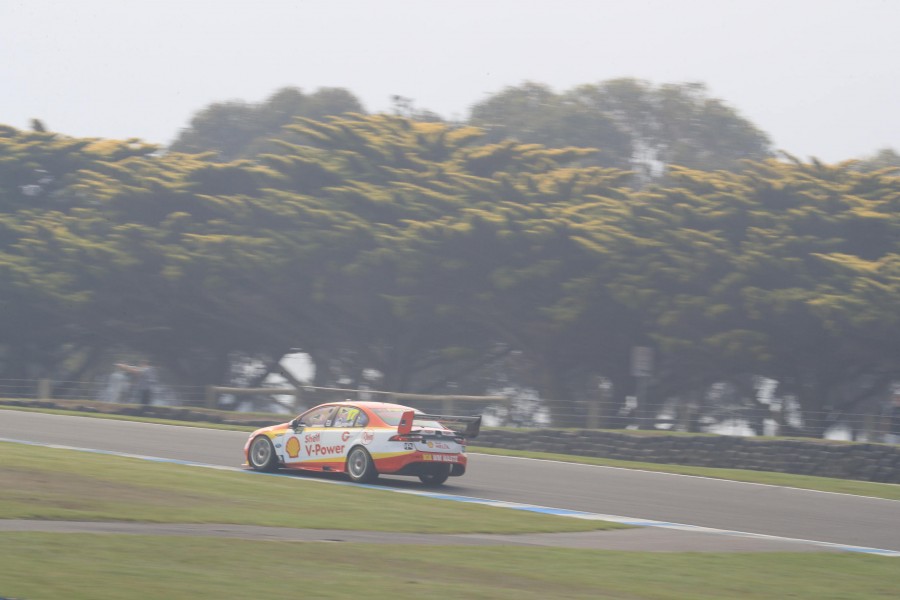 Asked if his team was trying to find the limits of the tyres, Shell Ford managing director Ryan Story said: “I wouldn’t necessarily go to that extreme.

“We were doing a race run and you want to find out where things are.

“It wasn’t exactly the best set of tyres that we brought with us either.

“We know where that limit is now, by default, and we learnt a little bit there.

“The tyre difference is the biggest change [since last year], but we’ve just seen in that session it’s mega quick.

Mark Winterbottom’s 200th Supercars event started with a trip through the gravel at Turn 2, a locked left-front on the way in sending the Tickford Falcon wide.

Having completed seven and eight-lap runs to end the session, Winterbottom and Mostert wound up 16th and 19th.

Between them, Whincup was 1.1044s off the pace set by Courtney in 17th, one place ahead of Anton De Pasquale who ran wide at Lukey Heights in the final minute.

Andre Heimgartner, like Winterbottom and Mostert, ventured off at Turn 2 in the first half of proceedings and was ultimately 21st.