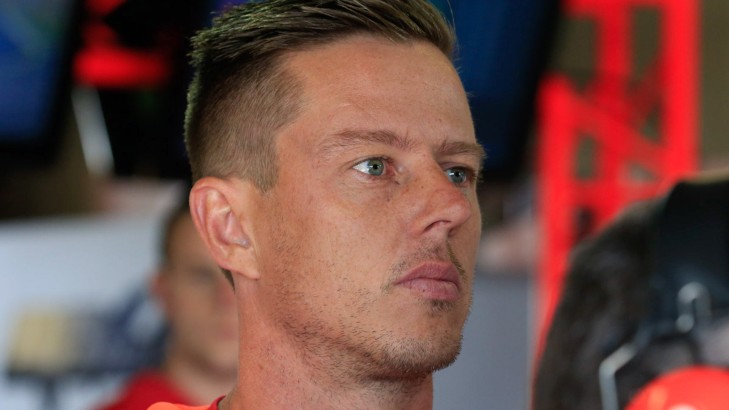 James Courtney has not given up hope of a V8 Supercars return at next month's Supercheap Auto Bathurst 1000.

Courtney may be watching this weekend's Wilson Security Sandown 500 from the couch, but the Holden Racing Team star and 2010 V8 Supercars Champion is fiercely focused on being behind the wheel for the year's biggest race.

He was injured in a freak accident at Sydney Motorsport Park last month, and was delivered another blow earlier this week, with scans showing he had broken five ribs, not three.

But the V8 Supercars driver refuses to give up on tackling Bathurst, with the 1000km classic still four weeks away.

"Within a 24-hour period of it happening I knew I couldn't do Sandown, but none of them have said I can't do Bathurst so I'm still charging for that one," Courtney told v8supercars.com.au.

Jack Perkins has stepped up from the co-driver role to take primary duties this weekend, with Russell Ingall back from retirement to drive alongside him. Perkins contested the Sydney Motorsport Park SuperSprint in Courtney's place and the two had the opportunity to utilise the team's one independent test day for the season last week to prepare for Sandown.

"There's been a lot of missed opportunity for me to develop the car and myself, which is very, very disappointing," Courtney said.

"But Bathurst is one of those events where you can win it from the back if you've crashed the car - they proved that last year - so anything's possible.

"I really enjoy the longer races, the car's come on really well in all the Sunday races this year, so these were the ones I was looking forward to.

"To miss the start of the enduro season is a big blow as well, but the positive thing is I'm not dead, far from it, still can race - I'm just on the sidelines for a few weeks."

Courtney's doctors will monitor his progress over the next couple of weeks as Bathurst approaches. And while he said he was "in lots of pain still, I can't sleep or anything" he will work with experienced team physio Phil Young to find ways to get himself in the best possible shape.

"That's the drama we've got, I can't do anything," Courtney said.

"I went through a period where I was angry and ate heaps of ice cream, smashed chocolate biscuits like you wouldn't believe, but that's gone and I realised I'm not going to be able to train to get that off!

"So it's going to be a very, very unusual approach ... it's just a matter of monitoring as my ribs heal, how we can go about fixing them and keep myself fit.

"We'll have a scan a couple of weeks out from Bathurst and have a much better idea of where we stand with racing there, but at the moment they haven't said I can't do it, so we're focused on that."

This weekend, it's up to Perkins and Ingall to take control. Courtney will stay in touch with team boss Adrian Burgess across the weekend, but knows it's up to the drivers and crew to stay focussed on the job at hand. 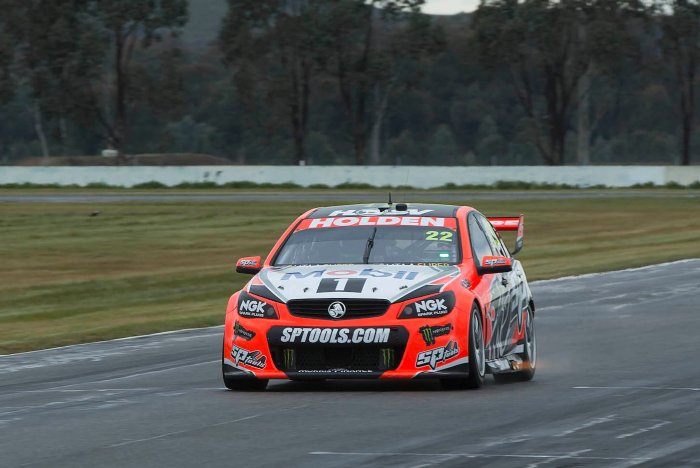 "The boys have got to do their jobs, I don't want them to have to worry about keeping me informed as well. First and foremost we're here to win and perform well for our sponsors, so me being informed of what's going on is not going to help them go faster, so first and foremost, get the car sorted."

He's happy to offer his advice if required, though.

"Adrian will just tell me what's going on during the day and what we're suffering from and maybe if the boys are struggling with something with the car, I could give them some tips as to what I'd do to drive around the problem... but I won't be on the phone telling them to pit now, change the tyre pressures or any of that kind of jazz."

While Courtney is disappointed he won't be steering the #22 himself, he is pleased with the men in the hot seat.

"[Russell's] a good, close mate and someone I've known for a very long time and respected growing up," Courtney said.

"So to have such a big name in our sport come out of retirement to do it for me is pretty cool.

"As much as Russell's playing it down, I think he's pretty excited to drive an HRT car. As much as everyone says it doesn't mean much, it does, and when he roll out on the race weekend he'll know it's pretty special.

"I think it's a good full stop on his career."

Perkins will contest the day's first practice session at 10.10am, reserved for primary drivers, with Ingall behind the wheel for the two following sessions with the co-drivers.

The Wilson Security Sandown 500 kicks off today - follow at home on FOX SPORTS 506, and on TEN from Saturday for live coverage.