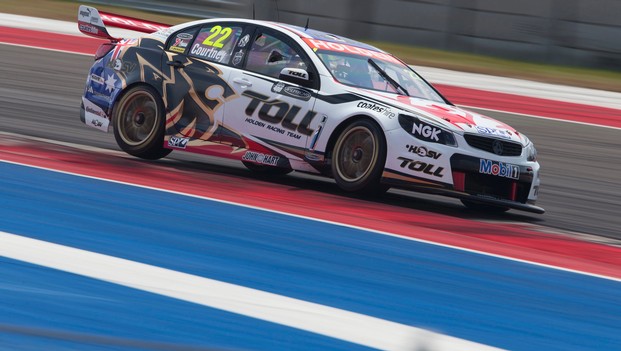 James Courtney says his Holden Racing TeamCommodore is the best it’s been all season after the team’s first independent test day of2013 at Winton Raceway yesterday.

Courtney, teammate Garth Tander and sole signedendurance driver Greg Murphy completed over 200 laps combined and weresatisfied with the progress made at the test.

“This is the first real test day we’ve had and it(was) an important day to improve our speed so that we’re able to take a betterpackage to Darwin next week and through the middle part of the season,”Courtney said.

“Triple Eight and Brad Jones Racing have been thebenchmark teams this season but we’re definitely a step closer with what we’vebeen testing.

“I think we’re on a level playing field now– while hopefully we’ve found something to jump in front of them.

Tander said it was difficult to develop the carat race meetings, though the tight V8 Supercars calendar has not left muchopportunity for the HRT to head to Winton to test.

“Scheduling a test is hard work, so we’ve had tohold off until now knowing we’ve got development items on the way,” Tandersaid.

“These days are like gold and you need to useevery second of the day to make sure you’re developing the car.”

Tander described his 2013 results as “solid”despite the team having not recorded a win so far.

“We’ve had a solid year of results; we’ve been onthe podium, building and getting closer to the front, but we’ve had a couplethings holding us back.

“If we’ve been able to unlock those key itemsthen I think we can win.. Testing is more about understanding what you’re doing so when we get to Darwinand find ourselves in certain situations we know what tool to pull out of thetool box and apply it to the car.”

The V8 Supercars race at the SKYCITY Triple Crown in Darwin next weekend, from June 14-16.

Garth Tander  ›
15' Holden Racing Team ›
2013 SKYCITY Triple Crown  ›
Stay In The Know
Sign up to the Virgin Australia Supercars Championship Newsletter
We use cookies to ensure that we give you the best experience on our website. If you continue to use this site we will assume that you are happy with it.Ok