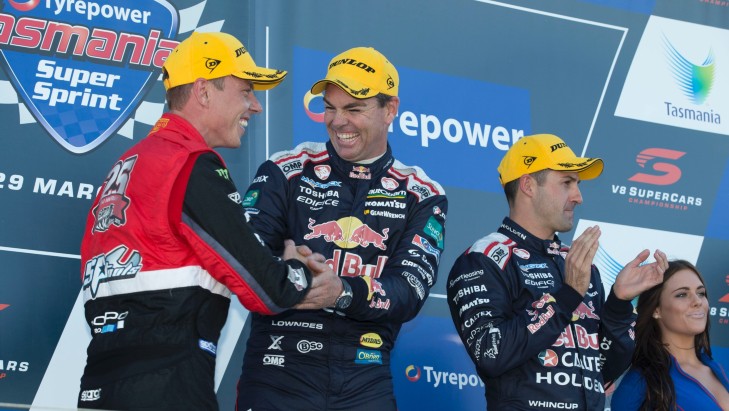 James Courtney has thrown his support behind Craig Lowndes for this year's drivers Championship, as the Red Bull racer faces off with Prodrive's Mark Winterbottom for V8 Supercars' top honour.

While Courtney will continue racing hell for leather to take wins and points for his Holden Racing Team this season, now he is out of the title fight the 2010 champ is hoping Lowndes snares this year's Championship.

"Personally ... I reckon it'd be great for the championship if Lowndes won," Courtney told v8supercars.com.au.

"Everyone knows he's a fan favourite and he's also a really nice bloke.

"Even manufacturer-wise, it's great for him and Holden to get on top."

Lowndes trails Winterbottom by 258 points but took an admirable chunk out of 'Frosty's' lead at the Gold Coast.

The Red Bull racer doesn't have a stellar history at Pukekohe - where the V8 Supercars line up on the weekend - but will be giving it his all to turn the tables on Winterbottom, who last year earned the Jason Richards Memorial Trophy by earning the most points at the round.

Meanwhile Courtney - who won on return to the Gold Coast after a freak injury caused him to sit out three events - will be pushing for points to help deliver HRT the teams' championship over both Prodrive and Triple Eight.

"I've got nothing to lose - if Winterbottom's in front of me I won't be shy about rolling off the brake and sliding up the inside because he's got a lot more to lose than we do," Courtney said.

While less publicised than the drivers championship, for those in pit lane the teams title is nothing to scoff at.

It means both cars combined earned the best haul of points across the season and determines pit lane position for the following year, which offers not just prestige but a strategicadvantage.

Combining Courtney and teammate Garth Tander's points, HRT is second on the table, 421 behind Prodrive and 79 ahead of Red Bull. Six hundred points are on offer each weekend.

Tander is fourth on the drivers' points tally, while Courtney is an impressive 10th despite missing three events.

"I'm pretty much just going for the teams championship and helping Garth get as far up as he can for his driver's championship," Courtney said.

"For me, I've got no chance of getting to the top, so I'm working with those cats and trying to get as good a result as we can.
"We haven't really got anything to worry about or a championship to think of, so looking forward to being a little more aggressive with the strategy and also on track... [so we'll] press on for the rest of the year."

While Courtney famously predicted Prodrive's downfall earlier this year, he concedes the team has managed to maintain results - aside from the last meeting, of course.

"They've done a pretty good job so far this year - the Gold Coast they didn't have the best of weekends. The last couple of rounds Lowndesy's pulled a few points out of him, especially last weekend.

"There's still a lot to play for, it's still far from over and those guys have to press on if they want to win this thing.

Last week, Courtney had follow-up scans to ensure racing on the Gold Coast did not do any further damage to his body.

Suffering five broken ribs and a punctured lung after a freak helicopter accident at Sydney Motorsport Park in August, the 35-year old returned to racing in spectacular fashion, winning the final enduro with Jack Perkins at the concrete-lined Surfers Paradise street track.

"I always thought it was going to be sore, but I'm pretty happy with how it's all come up," Courtney said.