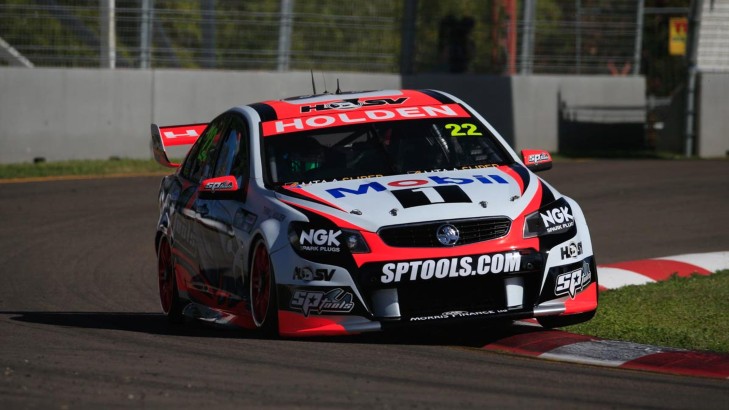 James Courtney wants another one-two finish for the Holden Racing Team in Townsville, but this year he wants the order reversed!

Last year Courtney followed teammate Garth Tander home in the Sunday 200km race on the Reid Park circuit for a team one-two that broke a victory drought dating for HRT back to the 2011 Supercheap Auto Bathurst 1000.

Courtney won at Townsville in 2009, when he was driving for Dick Johnson Racing.

"We had good success in the past here before I came to HRT and last year we got the one-two, although it was around the wrong way for my liking!" Courtney said.

"So I will try and rectify it this time."

Courtney explained the team had worked through a series of changes on Friday and this morning put a combined se-up into the car that reflected the lessons learned from that.

"We went pretty good and we are pretty happy with that," he said. "Cheese (van Gisbergen) has been pretty speedy all weekend and has been the guy to be chasing. We have closed that gap a lot and I still have a few little things to tweak.

"It's definitely better than being in the back.

"It is coming along nicely. Garth and I enjoy Townsville and all street circuit really, and our car probably shines on the majority of street circuits."

The drivers face two 10 minute qualifying sessions and two 125km races this afternoon. Both races are for hard tyres and one pit stop to change at least two tyres is mandatory in both.

James Courtney  ›
15' Holden Racing Team ›
2014 Castrol Townsville 500 – Driven by TAFE Queensland  ›
Stay In The Know
Sign up to the Virgin Australia Supercars Championship Newsletter
This website uses cookies to improve your user experience. By continuing, you will be providing your consent to our use of cookies.Ok