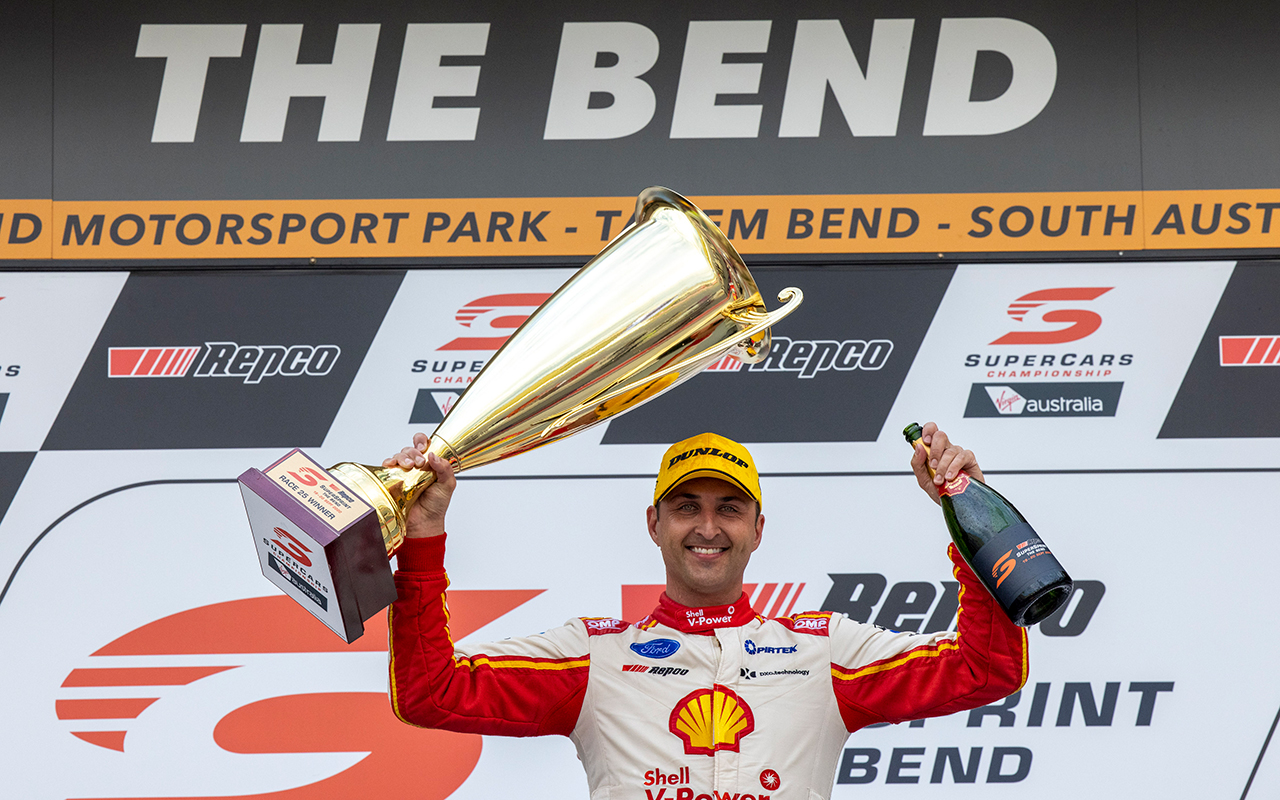 Fabian Coulthard won a dramatic opening race at the Repco The Bend SuperSprint, where title rivals Jamie Whincup and Scott McLaughlin clashed on the opening lap.

Although the rain that promised to spice up the race never arrived, the first Supercars contest at The Bend on the soft compound Dunlop tyre lacked nothing for action.

The result ended a 41-race winless streak for Coulthard, making the most of a difficult day for Shell V-Power Racing teammate McLaughlin.

McLaughlin took the lead off the start from Whincup, van Gisbergen and Chaz Mostert, who had made a slow getaway from ARMOR ALL Pole.

But McLaughlin’s lead would only last until Turn 17, where Whincup dived down the inside and locked his rear brakes as the Shell Ford covered.

Side-on contact from the sliding Commodore bumped both cars off the road – Whincup clambering back on 10th and McLaughlin 19th.

They were eighth and 17th by the time they both pitted five laps later, with McLaughlin emerging from the lane 10s ahead after Whincup served a 15-second penalty.

Van Gisbergen had inherited the lead thanks to the opening lap incident and held the top spot until pitting on lap eight of 24.

He returned to the top once the pitstop cycle was completed, but with the Red Bull Commodore chewing up its tyres, the Kiwi was under heavy pressure.

Despite having three-lap older tyres than van Gisbergen, Le Brocq harassed the leader and briefly hit the front with an inside move at Turn 17 on lap 18.

Van Gisbergen however retook the place on the exit and, with Le Brocq held wide, Coulthard demoted the Supercheap Mustang to third.

Le Brocq took second back from Coulthard at Turn 6 on lap 22 and then had another go at van Gisbergen, only to again fall behind the Shell entry in the battle.

Van Gisbergen then finally lost the lead into Turn 1 the following lap, where Coulthard and Le Brocq both found a way by the ailing Red Bull entry.

That left the two Ford drivers to fight it out for the win – Coulthard hanging on by 0.4693s.

McLaughlin took the flag third but was dealt a 15-second time penalty for a lap 22 clash with Lee Holdsworth while fighting for fourth.

Van Gisbergen fell to ninth, while Whincup also struggled on tyres late, finishing 19th to trail McLaughlin in the standings by 151 points.

Mostert was another to struggle with tyre life in the race, finishing 12th.

There were no such worries for Coulthard, who took a breakthrough win during his 200th Supercars Championship round start.

"Forty-one races is a long time ago and it's my 200th round start as well, so to get a win is awesome," he beamed.

"I can’t thank my guys enough, little Mark [Fenning, engineer] got my car good so we bided our time there at the end."

Le Brocq meanwhile had mixed emotions about second place, having lost out to Coulthard when he tried to pass van Gisbergen on the outside.

"You live and learn. I’m a bit annoyed at myself for placing the car in the wrong spot basically," he said.

“I thought we had the car to win today so it’s a bit frustrating for me, but still over the moon and an awesome result for everyone in the team."