Coulthard set the pace in the ARMOR ALL Top 10 Shootout aboard the two-door Ford that replaces the Falcon.

He turned a 1:19.8918s to finish 0.3261 seconds clear of the field, with Jamie Whincup and Scott McLaughlin second and third.

It is Coulthard's ninth Supercars pole, and first in nearly two years, his last coming in May 2017 at Barbagallo Raceway.

"It’s been a real effort to get these Mustangs on the grid and to get the first pole for a Mustang is pretty special, I can’t thank everyone enough," Coulthard said.

"It’s awesome for my confidence, it’s good to know that we’re on the way back. It’s a long way to go until November in Newcastle, but we’ll give it a good go."

The time to beat gradually came down through the session, with David Reynolds, Shane van Gisbergen and Cameron Waters having stints at the top.

Third-last out, Coulthard turned the first and ultimately sole 1:20s lap, a 1:19.8918s with only Whincup and McLaughlin left. 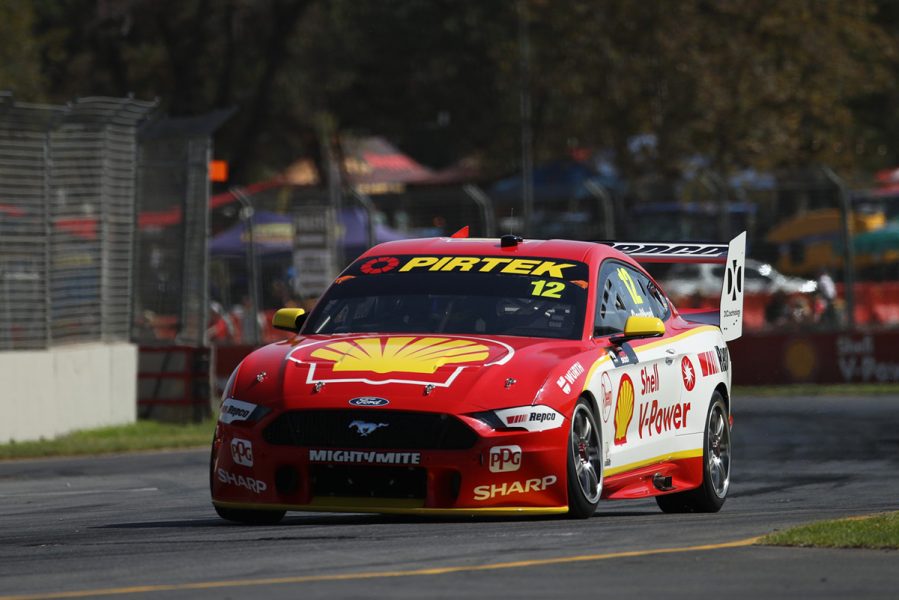 Whincup could not beat that effort, making an error exiting Turn 7, and neither could McLaughlin.

"Three tenths is a long way in our game. Big congrats to Fabian and the Shell crew, they did a good job and had two very fast cars," Whincup said

"The race is a long way, front-row of the grid, we couldn’t be happier with that from where we’ve come from at the test day.

"Fundamentally our car isn’t right, it’s quick and it’s there, but it’s far from right and it just bit us a little bit in the Shootout there.

"We’ll keep working away, it might take three or four rounds, but we’ll get there."

That left Coulthard with a handy three-tenth buffer over Whincup, while McLaughlin had to settle for third.

"Fabs did an awesome job, that time was pretty good. Even before I went out, I knew it was going to be a tough one," McLaughlin said.

Tickford Racing's Waters made it three Mustangs in the top four, while van Gisbergen and Reynolds filled the next two places.

Reynolds picked up three places from ninth in the provisional order, while Will Davison, Nick Percat, James Courtney and Rick Kelly rounded out the runners.

Beyond the top 10, Tim Slade and Chaz Mostert will start 11th and 12th, while Anton De Pasquale will be at the back of the grid following his ARMOR ALL Qualifying crash.