Shell V-Power Racing chief Ryan Story was impressed by Fabian Coulthard's aggression in the exchange that left Jamie Whincup in a Newcastle tyre barrier on Saturday.

Having been a title contender deep into the 2017 season for the Ford squad, Coulthard has played second fiddle to team-mate Scott McLaughlin all year.

Entering the 2018 finale, McLaughlin and Coulthard were first and seventh in the standings, while the Triple Eight trio filled second to fourth.

Coulthard made a strong start to the Newcastle event by qualifying fourth, and ran third on the opening lap of the 250km race before letting McLaughlin through.

Whincup later ranged up behind Coulthard after both drivers' first stops, the Red Bull Holden on tyres that were 10 laps newer.

There, Whincup tried to do the same but after contact between the pair, the Commodore ended up nosed into a tyre barrier.

Stewards opted against taking any action on the incident, from which Whincup regrouped to finish fourth, while Coulthard later crashed at Turn 1.

Asked about the exchange by Supercars.com, Story said: "Fabs was aggressive, for sure.

"He got hit a few times along the way too, it was deemed a racing incident, which I think is fair.

"That’s how the cookie crumbles, but he showed great race craft there, he held his own, showed his mettle and did what he needed to do.

"I thought it was sensational, it was great to watch." 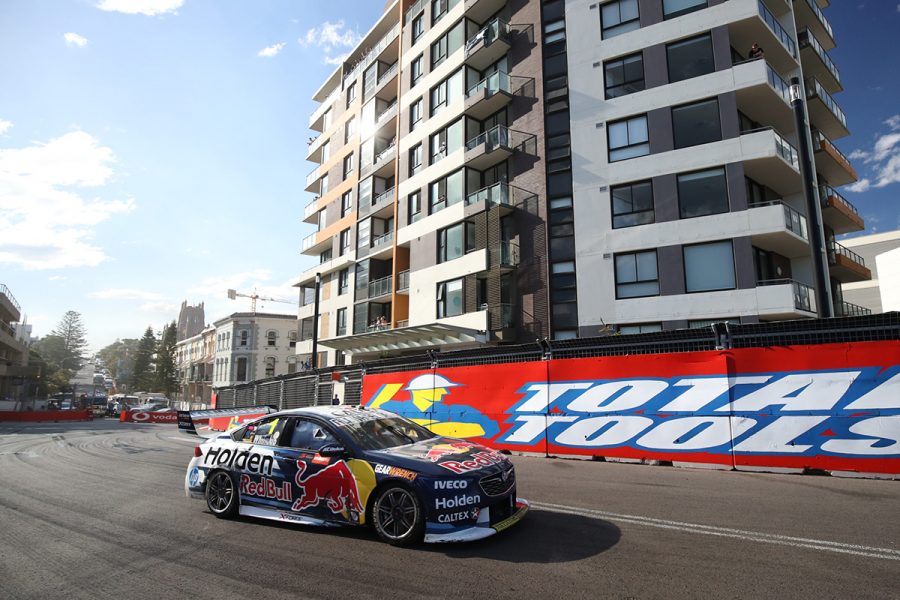 Speaking post-race before reviewing the vision, Whincup indicated he'd expected to be able to run side-by-side with Coulthard onto the front straight.

"Obviously it was going to be hard, as hard as it gets, racing-wise," he said.

"I've been racing Fabs for years and expected no issue whatsoever, but unfortunately there was an issue and we ended up with me in the wall."

Coulthard was later placed fourth on lap 42 when he lost the rear end at Turn 1 and clouted the tyre barrier.

Nick Percat running immediately behind was caught up in the accident, before Tim Blanchard hit the side of the Falcon.

"I’m really disappointed with how the day panned out," Coulthard said.

"I feel like we could have been on the podium today without too much drama, but I made a small error, locked the rears and ended up in the fence at Turn 1.

"Nick was really close behind me, and that tore the rear of the car off and then to finish it, half an hour later Blanchard came through and collected me.

"It's unnecessary work for the boys, but we did what we could for the team in the early part of the race, to get Scott into a good position, and that was pretty much all we could do."

With the crash, Coulthard falls from seventh to ninth in the standings, 1,344 points behind championship leader McLaughlin.