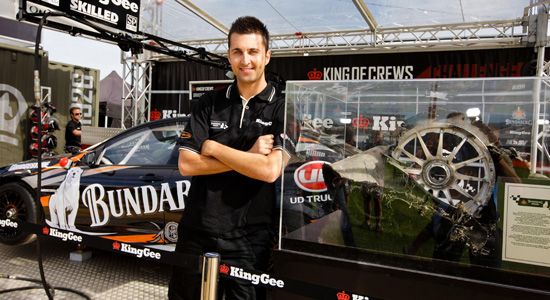 IT’S the accident that Fabian Coulthard is sick of hearing about but it’s the crash that has put him into the Bathurst highlights reels for years to come.

When a left-rear tyre blew on his Bundaberg Red Commodore on the opening lap of the 2010 Supercheap Auto Bathurst 1000, the Kiwi was sent on a wild series of rolls through the Chase.

He emerged unscathed as the safety systems in the Walkinshaw Racing-built Commodore did the job and protected its pilot, and the accident almost instantly worked its way into highlights reels all over the world.

Now the car at the centre of one of Bathurst’s biggest accidents and thus a piece of V8 Supercar history – and one of the Top 50 ‘Awesome Bathurst Moments’ of all-time as covered this year by the BigPond Sport V8 Supercars website – is up for sale.

With the introduction of Car of the Future for next year’s V8 Supercars Championship, Walkinshaw Racing have no less than five cars on the market looking for new homes – and the Coulthard chassis, WR 07, is perhaps the most notable.

Fully repaired from its Bathurst accident, it hasn’t raced since and featured last week in our Saturday Sleuthing story covering the most winning chassis of the V8 Supercars Championship era.

In the hands of various pilots, WR 07 won 14 V8SC races to make it the eighth most successful car since the five-litre/V8 Supercar rulebook was introduced to the championship in 1993.

In the hands of Garth Tander it won the inaugural Hamilton street event in 2008 as well as that year’s L&H 500 at Phillip Island (Mark Skaife’s last win with the Holden Racing Team).

Tander drove it to four more race wins in 2009, including the inaugural Sydney Telstra 500 race before he won the Clipsal 500 aboard it in 2010 prior to it being transferred into Bundaberg colours for Coulthard to drive.

After its Bathurst accident the car was used as a pit stop challenge car at V8 Supercar events last year and has remained this year in the Walkinshaw Racing workshop in Melbourne.

It made a cameo appearance in Channel 7’s Bathurst telecast this year too, draped in Supercheap Auto panels in the Dick Smith Tech Centre for pit lane reporter Mark Larkham to crawl all over and give viewers behind-the-scenes looks at components and car technology during the telecast.

Also on the market is the last of the ‘current generation’ cars built by HRT as driven by James Courtney in the second half of this season and taken to podium finishes at the season-ending Sydney Telstra 500.

The team has elected to retain the car driven this season by Garth Tander given it won Bathurst in the hands of the Western Australian and Nick Percat last year.

It also retains the 2009 Bathurst winning car taken to victory by Tander and Will Davison.

Click here to check out the Coulthard car and its details.

08/12/2012
Stay In The Know
Sign up to the Virgin Australia Supercars Championship Newsletter
We use cookies to ensure that we give you the best experience on our website. If you continue to use this site we will assume that you are happy with it.Ok