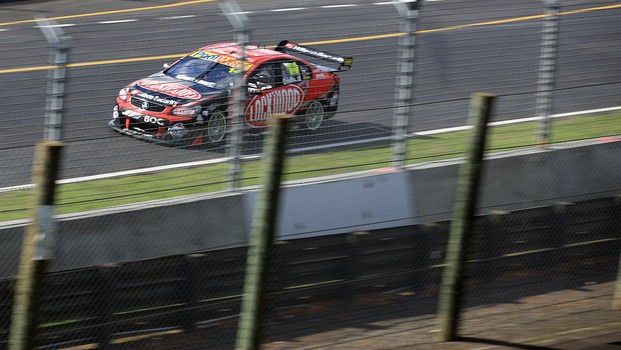 While Coulthard seemed reasonably happywith the #14 Lockwood Racing Holden Commodore, he said the team will makeadjustments prior to the three afternoon sessions.

“(The car’s) alright – we need to make it alittle bit nicer to ride the bumps – but so far, so good,” Coulthard said.

“We rolled out the car and it’s fast – it's always a worry, you go from one round to the next and you don’t know if thecar is going to perform as well as it should – but to roll the car out andgo quickest in the first session in front of a home crowd is a pretty goodfeeling.”

The only current Kiwi racer to have driven a V8 Supercar around Pukekohe before, Coulthard described the new segment ofthe track as “different”.

“Obviously it’s got no grip on it becausethere’s no rubber on it yet, so I’m sure as the weekend progresses it will getbetter and better.

“Tomorrow’s the day – it’s a good start butnot we’re not getting the hopes up just yet.

Coulthard and teammate Jason Brightdominated the last event in Tasmania last weekend, winning all three races between them.

Coulthard has two championship race wins under his belt so far and currently sits seventh in thechampionship.

Fabian Coulthard  ›
15' Team BOC and Freightliner Racing ›
Stay In The Know
Sign up to the Virgin Australia Supercars Championship Newsletter
We use cookies to ensure that we give you the best experience on our website. If you continue to use this site we will assume that you are happy with it.Ok