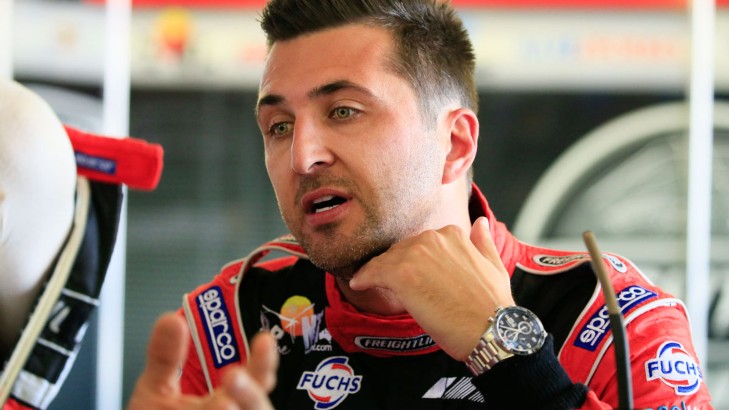 Fabian Coulthard has spoken revealingly about the stresses he has faced in 2015 while negotiating his driving future while making sure it didn't affect his on-track performance.

The New Zealander was the centre of speculation for much of the season as he worked out behind the scenes whether he would stay in the Freightliner Holden Commodore VF at Brad Jones Racing or make the leap to DJR Team Penske.

As we all now know, the 33-year old has been named as part of a two-car DJR Team Penske 2016 attack, joining Scott Pye in the line-up.

Being able to sign his new deal and make the news public was a huge relief Coulthard revealed as he prepared for today's kick-off of the Castrol Gold Coast 600.

"If I said it didn't affect me at all I would be lying," Coulthard told v8supercars.com.au. "The hard part is the negotiation phase and things are happening behind the scenes and it's definitely a distraction.

"When I was in the car I didn't think about it, but when you are out of the car and things are going on, people are saying things, you are always reminded of it. I think that part that consumed me a little bit.

"And (partner) Beck's at home and we go through it all together and it's stressful. To have it all locked away and not have to worry about it any more is quite soothing."

Coulthard hinted at the issues he had faced when he tweeted about it last week:

"I just wanted to express the fact that I am moving on, but I have a job to do here and I want to do the best possible job I can do for the rest of the year," he explained.

"I am not saying that I haven't been, but there's been thing in the back of my mind playing on 'what am I going to do where am I going to go'.

"I am just happy that's all out in the open now and I can just get on with the job of driving this (BJR) car as fast as I can."

Coulthard's decision not to hurry his decision to re-sign with BJR early this year and then to announce he was moving on before he had signed a new deal, was a good example of the high-wire act professional racing drivers perform, he said.

"Its cut-throat," said Coulthard. "From the outside you see it as a dream job - don't get me wrong, any time you can turn a hobby in to a job it is a dream job - but at the end of the day it's work.

"I enjoy my work, which is important, but you are always up for review, someone always has more money who can buy out of your seat or something like that.

"Obviously there's been a method to my madness," he added. "It's all part of a bigger picture to try and give myself the best possible opportunity I can to win championships."

While Coulthard is insisting his focus remains on doing the best possible job this weekend and the rest of the year, joining a race team owned by motor racing icon Roger Penske is clearly a career highlight.

"Roger (Penske) called me the other day and welcomed me to the team," he revealed. "And I thought that was pretty special. It's not often you can say Roger Penske has called you up and said 'welcome to the team' on a personal level.

"He is coming to New Zealand (for the November 6-8 ITM 500 Auckland) and I am looking forward to catching up with him there and seeing what it's all about."

Meanwhile, Coulthard says this weekend will be a challenge because BJR cars do not traditionally perform well on the Gold Coast street circuit. However, he believes there have been improvements this year that may deliver him and co-driver Luke Youlden a better shot at a strong result.

"It has been tough here. One of our strengths is the soft tyre and they have predominantly taken that away from us. Attacking kerbs and changes of direction is not a strength of these cars but I feel like we have made improvements.

"We scored BJR's first street race win at the Clipsal 500 and that was on the hard tyre, so I feel like we have made good inroads."

Coulthard runs fifth in the drivers' championship with 11 races to run. If he stayed in that positon it would be his best result in his eight full-time seasons in V8 Supercars.

"Top five would be nice," he said. "The PRA guys are doing a phenomenal job and they have been the strength of field this year.

"But we will take our chances as they come and try and get up that championship ladder. We won't give up until the very end."