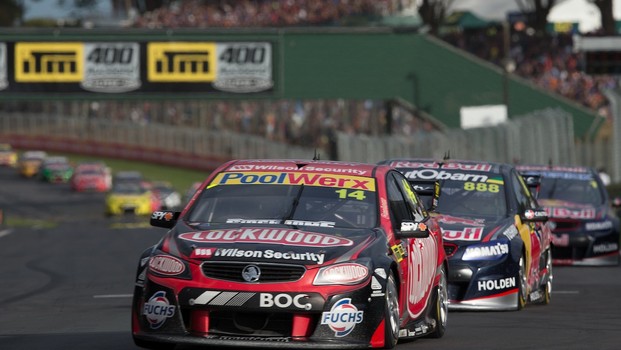 Things didn’t all go Fabian Coulthard’s waytoday, with his Top 10 Shootout time disqualified for Race Six and a 10-secondpenalty handed down for a jumped start in Race Seven at the ITM 400 Auckland.

This created an unusual situation in theafternoon’s second race because the Lockwood racer continued to lead, thougheffectively he was 10 seconds down the field.

“I always knew that was the situation whereI'd jumped the start, because the clutch grabbed – and I knew I needed to get 10seconds in front of the next person,” Coulthard said.

“But you’re never going to get 10 secondson the guys in the front – I knew I would have to filter back in the pack somewhere,I just didn’t know where. So I had to put my head down, bum up and get on withit.”

Coulthard felt the 10-second penalty wasthe best way to deal with the situation, as a pitlane drive-through penaltywould have ended his race.

“If it was a pitlane drive-through I’d beat the back for sure.

“I think that the (current) system works.

“I think there were people who would preferI had a pitlane penalty – it depends what side of the coin you’re on.”

However, while Coulthard may have beenadvantaged running out of the traffic mid-field, the deployment of the SafetyCar did have a negative effect.

“The first safety car wasn’t so bad – wegot quite a good gap and the field spread out quite a lot, so that would’vehelped us. But the second safety car just ruined any hopes.”

Given the issues at the start of the race,Coulthard felt finishing in 10th wasn’t a bad result.

In the post-race press conference, HoldenRacing Team’s Garth Tander said when prompted he didn’t agree with the10-second penalty rule used in that context.

“I think the penalty works really well whenwe’re doing pitstops and they hold you 10 seconds because you can race up tothat point, but then effectively you’re placed in your correct position,”Tander, who finished third, commented.

“Whereas these races, where we don’t havepitstops, I think (drivers) are not effectively in their correct position and Idon’t think that’s right.

“So I don’t know the answer, but in Race Sixwe were driving around and (Alex) Premat was on a 10-second penalty as well.

“Those guys, you’re following them – thereforeyou get hot air in your brakes – from a car that’s not effectively in that partof the race.

“He might be 10 seconds behind you but he’snot in your race.

“I don’t know what the answer is but I don’tthink (the penalty) works for these non-pitstop races.”

Race Seven winner Jamie Whincup agreed thenature of the rule was based around pitstops.

“You don’t want to give someone a drive-throughfor a small error,” Whincup said.

“The drive-through just writes the completeday off. The 10-second rule works with pitstops, but this round doesn’t havepitstops.

“I don’t know the answer but it’s notperfect.”

Garth Tander  ›
2013 ITM 400 Auckland  ›
Stay In The Know
Sign up to the Virgin Australia Supercars Championship Newsletter
We use cookies to ensure that we give you the best experience on our website. If you continue to use this site we will assume that you are happy with it.Ok