Coulthard: I'll let my driving do the talking

Coulthard: I’ll let my driving do the talking

Coulthard: I'll let my driving do the talking 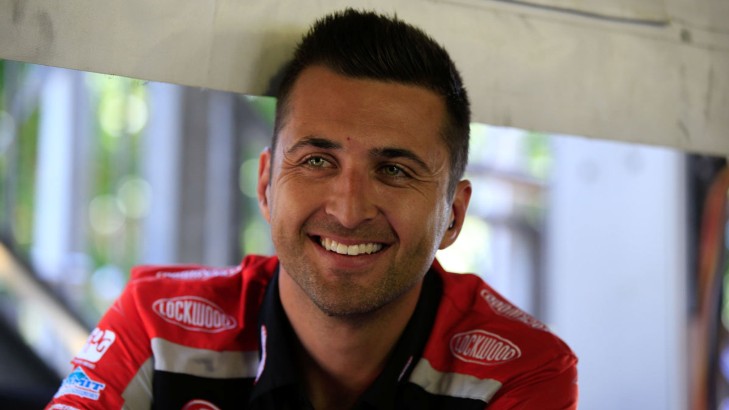 He could be one of the key players in one of the most hectic V8 Supercars driver movement silly seasons of all time, but Fabian Coulthard has already made it clear he will be happy to stay put at Brad Jones Racing .

The 32-year old English-born, Melbourne-domiciled Kiwi enters the third and final year of his first BJR contract in 2015, becoming available at the same time as some of the category's best drivers.

Not to forget highly rated Nick Percat and Scott Pye - both of whom are regarded as worthy of being in the championship full-time on merit.

"This (BJR) is the first place I have stayed at more than two years and they haven't shuffled me on," Coulthard told v8supercars.com.au. "So they threw me a lifeline from Walkinshaw Racing to here and I am happy.

"BJR is an awesome place. I get along with (team owners) Brad and Kim (Jones) and all my guys within the team - especially the guys on my car. And I have got a great bond with my engineer Phil Keed.

With so many name drivers in the mix Coulthard concedes there is every chance of some unexpected moves taking place. He says he'll let his driving do the talking, revealing he has no other choice anyway.

"I just go out and do the best job I can," he said. "I am not legally allowed to talk to anyone until October next year, so I will just go about my business and do my thing.

"If I do that then my career will be looked after."

Coulthard made his debut in V8 Supercars in 2004 with Tasman Motorsport. He moved to Paul Morris Motorsport in 2006 and then went full-time in the championship with Paul Cruickshank Racing in 2007-08. He spent two years at Walkinshaw Racing in 2010-11 in Bundaberg colours and then moved on to BJR in 2012.

With the advent of Car of the Future he became a fixture at the front of the pack in his Lockwood Racing Holden Commodore VF, winning two races in 2013 and another in 2014.

He finished a career-high sixth in the championship in 2013 and dropped back to eighth in 2014, but ran as high as second this year.

Coulthard's 2014 was also highlighted by setting the new fastest lap for V8 Supercars at Mount Panorama, a stunning 2min05.6080.

However, BJR took some time to sort the latest generation Triple Eight front-end and also fell behind in the engine power wars for some time this season.

"It's been a good year but it's been tough," said Coulthard. "The middle part of the year is what has done the damage. I think if we can have a complete year next year that will put ourselves in a better position."

Coulthard enters 2015 with a new naming rights sponsor for his car, Freightliner trucks, which has signed a three year deal with BJR. The team has welcomed the new partnership in a tough commercial environment and says it will be a key foundation for its ongoing R&D program.

Coulthard will be joined again at BJR by Jason Bright in the BOC Commodore and Dale Wood, who completed his first season with the team in 2013 racing the Advam/GB Galvanising Holden.

Godzilla could return to Bathurst 1000

All change at HRT

Dumbrell: We will be more competitive next year