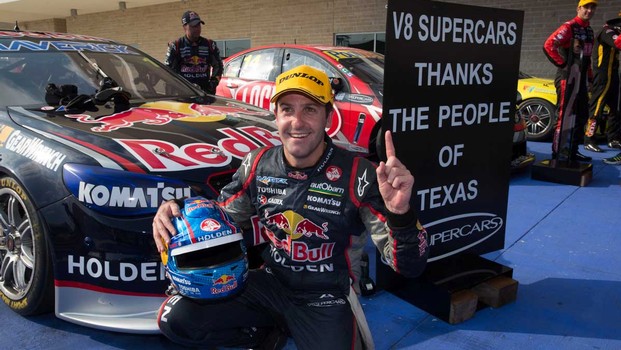 Whincup – who has won races in Bahrain, AbuDhabi and New Zealand, and now in the United States – has taken his 70thcareer win and despite his saying the team is not dominating the Championship, heand Red Bull Racing Australia teammate Craig Lowndes have won the last six ofseven races. The pair sit first and second in the Championship heading into thesixth of 14 events on the 2013 Championship calendar.

But with so many achievements including four Championshipand Bathurst wins – and having barely turned 30 – what keeps thecurrent Champion and points leader motivated and interested in V8 Supercars?

Whincup said the new Car of the Future was a keyfactor in keeping him interested and engaged with V8 Supercars.

“As I said last year, if we were running thesame cars this year as last year – as arrogant as it sounds – it would’vebecome repetitive,” he said over the weekend in Austin.

“It would’ve been just same in same out, wewould’ve massively needed some sort of motivator.

“But with the new aerodynamics, new car, newsponsor, it’s just a big breath of fresh air.”

Prior to the event in Texas, Whincup said hewasn’t at all prepared to face the new Circuit of the Americas, and yet hestill managed to record a qualifying time seven tenths of a second faster thanthe rest of the field, before going on to win three of the four races, andfinish in third in the other.

“Previously I’d somewhat done my homework beforeall the new events, where this weekend I was probably the most unprepared I’dever been,” Whincup said of the Austin 400.

“It showed in Practice, I was well down therunning order…

“We should’ve started off a lot stronger andgotten on top of the car earlier before the weekend.

“The process (of learning a new circuit) is notwhat I did – that’s a question for the other blokes, they did a better job thanme this weekend.”

However, Whincup says the lack of preparationwas because of a lack of time on his part, not that his motivation is droppingand he’s finding V8 Supercars less of a challenge.

“The wins are good because you achieve somethingmassive with a group of people, so you never get used to that. But the realchallenge for me is driving the car and it’s forever different.

“And this weekend we threw on a complete new setof variables. What I felt with the car then I’ve never ever felt before.

Given his results in Austin, is it fair to sayWhincup doesn’t need to “do his homework” anymore?