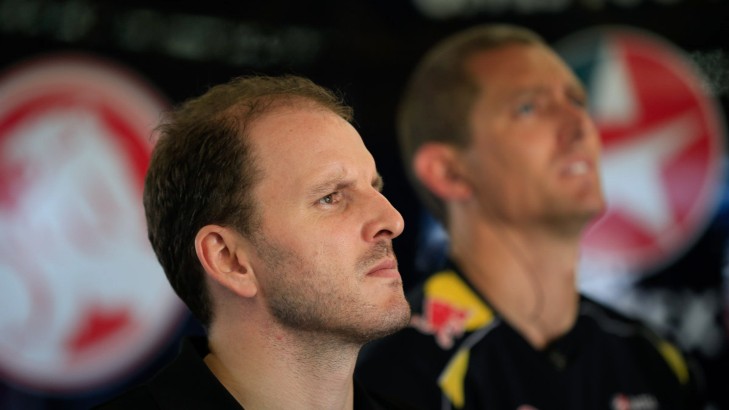 Paul Dumbrell has said stealing the Series lead back from Ash Walsh is not his priority for this weekend in Townsville, with his sights firmly set on delivering consistent results.

The 2012 Bathurst winner is playing dual roles at the Castrol Townsville 500 - Driven by TAFE Queensland, piloting the #88 Eggleston Motorsport entry in the Dunlop Series in preparation to join Red Bull Racing for the Pirtek Enduro Cup for the third year in a row.

Dumbrell surrendered his Dunlop Series points lead after he was forced to retire from the last round in Perth due to work commitments, but said he won't be trying to get back to the top of the points this weekend.

"We've come over here and it's probably not critical for us to get the championship lead back here. But, we certainly need to have it on one day and that's the day in December at Homebush," he told v8supercars.com.au.

"If the opportunity presents itself we will absolutely take it, but both Ash [Walsh] and Cam Waters are both really quick.

With only four practice days in the cockpit of Jamie Whincup's Commodore this year, seat time in the main game car is limited before the Melbourne-resident launches his Pirtek Enduro Cup campaign.

Cutting laps in his Eggleston Motorsport Holden allows Dumbrell to catch up on his experience behind the wheel, while also spending a large portion of his time this weekend with the Red Bull racing outfit and maintaining his fitness.

"I went up to the [last] test day and got 10 laps, because it was obviously pre-Darwin and the team really wanted to get on top of a few things, so I sort of get the lunch time stint," he said.

"[This weekend] I try to catch up with Jamie and the guys to sort of see what's been happening, how the cars reacting, just to get my head around it - probably more for my benefit than anyone else's.

"It's good to be up here for the whole weekend, other than last year where I came up on the Friday, did my laps then flew back home that night.

"Jamie and I do a training camp every year, so we're also off to Noosa in early August for a week and that will be a good week to focus before going into the enduros as well."

Dumbrell qualified third behind Waters and Walsh for this afternoon's 29-lap race at 3.30pm AEST at the Castrol Townsville - Driven by TAFE Queensland.

Paul Dumbrell  ›
15' Red Bull Racing Australia ›
2014 Castrol Townsville 500 – Driven by TAFE Queensland  ›
Stay In The Know
Sign up to the Virgin Australia Supercars Championship Newsletter
We use cookies to ensure that we give you the best experience on our website. If you continue to use this site we will assume that you are happy with it.Ok