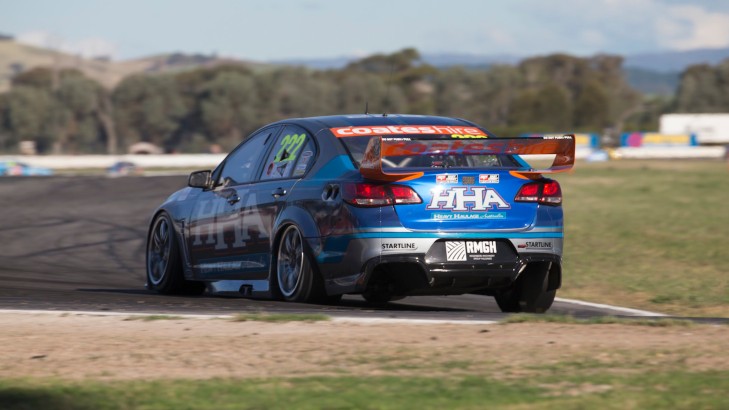 Walkinshaw Racing has been going from strength to strength this season, as the Holden Racing Team emerges as a contender and sits third in the teams' points standings.

Continual upgrades to the four Commodores, including the two HRT cars, the Supercheap Auto racer and HHA Holden, have seen the team continue to post results.

And after day one of a two-day test at Winton Raceway, team boss Adrian Burgess is confident they can continue to challenge at the front, with co-drivers performing well and relaying positive feedback about the progress of the cars.

Gavin had his second taste of the New Generation V8 Supercar after sampling it at the sydney.com pre-season test in February - and remarkably noticed a big difference in the feel of the HHA V8 Supercar.

"He did a great job straight away," Burgess told v8supercars.com.au of Gavin.

"He's a professional driver, he drives a lot of cars around the world and has definitely helped us get a slight insight into the team and the car... He ran with us at Eastern Creek, so he already came with a bit of an idea what it was all about.

"Interestingly, he gave us some feedback on the overall feeling of the car from February to where we are today and his comments were favourable, so it's just another driver backing up what we've been doing the last couple of months - so it was quite good to hear good feedback as well."

Greg Murphy recently told v8supercars.com.au he felt the car improving, and according to Burgess was even more confident today.

"Murph said the same again today - it's a totally different car to the car he had in the endurance season last year, so it's good.

"Olly (Gavin) did feel it from Eastern Creek to today, so that's good to hear as well."

While some teams decided to pack up and push testing out until tomorrow with rain forecast, WR, along with Nissan, stayed on-track and managed several hours in the dry before afternoon showers.

"It was dry pretty much until two o'clock so we managed to get through a range of changes across all four cars, and gave all the co-drivers some good dry laps as well as wet laps ... this afternoon, so quite happy with the day," Burgess said.

"In endurance season, over the three race (meetings), chances are you're going to maybe get some wet weather, so I thought it was good to get some wet running. Eastern Creek clearly showed you can either get it right or get it wrong in those conditions. We managed to try some things as a result of Eastern Creek, so we were still productive in the wet.

"We've got some new bits on the car for the test day and it was good we got to run them this morning in the dry, so they've proved good at the moment. The drivers liked the change, they were quicker, so making progress hopefully."

Burgess is hoping the weather will be fine tomorrow - but not as much as some of the other teams must be.