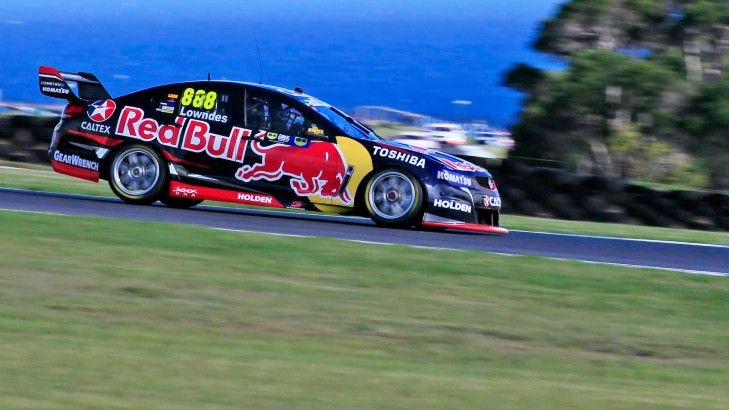 Craig Lowndes believes he will have a real shot at winning the 2015 V8 Supercars drivers' championship if he closes the gap to Mark Winterbottom to 170 points or less at the conclusion of action today in the WD-40 Phillip Island SuperSprint.

And Lowndes also moved past David Reynolds into second place in the drivers' championship after The Bottle-O Falcon was tipped into a spin by Tekno's Shane van Gisbergen and finished last in the opening encounter.

There are 150 points up for grabs today, with another 300 points to be divvied up over three races at the Coates Hire Sydney 500 championship finale in two weeks.

"We have narrowed the gap today, but Frosty still has a decent points advantage over us," Lowndes told v8supercars.com.au. "But if we continue to narrow that gap tomorrow and get it down to something like 150-to-170 points I think we will go to the final round with a real shot at the title."

Lowndes has not won a drivers' championship since 1999 when he was driving for the Holden Racing Team. In his 10 years racing for Triple Eight he has finished second five times and fourth five times, while team-mate Jamie Whincup has claimed the title six times.

"Sometimes when I have finished second behind Jamie we have not been consistent enough throughout the year and made too many mistakes so we have fallen that little bit short.

"Even if you look at this year as a team we were a little bit off our game mid-season and we have worked pretty hard as a team to bounce back. That shows in the pace of the cars in the closing stages of this championship.

"We go to Homebush in a couple of weeks time where we have had some good results and some bad results. But it's a street circuit and anything can happen.

"So we will just keep fighting and see what we can do."

With Red Bull Racing also closing on Pepsi Max in the teams' championship Whincup - who ran 2-1 yesterday - described today as the "biggest day in the championship". Lowndes wasn't quite so definitive, but still understands how important this afternoon's race will be.

"It's certainly one of the most important races of the year so far," he said. "We are focussing on what we can do, so if we keep winning races and keep the pressure on then who knows what is going to happen.

"We just have to do our thing and keep working pretty hard."

He identified qualifying as a key to claiming a good result in today's 200km mini-marathon. The race will require at least two pits stops and will be run only on Dunlop hard tyres.

"If we start somewhere near the front then I am confident we will be on for a good results," said Lowndes, who qualified on the second row for both Saturday races.

Lowndes clearly believes he has the pace at Phillip Island to close the points gap further, pointing out the momentum has swung toward RBRA in recent events as Prodrive has lost its winning ways in sight of its first ever drivers' and teams' championships.

"Sometimes the best form of defence is attack," Lowndes said.

"[The momentum] is absolutely not with us at the moment because our points lead is being whittled away," Edwards told v8supercars.com.au last night.

"Although up until today I think the stat was we needed to finish seventh in every race, and after those two races we only need to finish ninth in every race. So whilst the points lead has whittled away a little bit, the points lead we need to get is slightly less. But we don't want to win the championship like that. We want to win the championship by winning the last few races."

Plenty predicted the fast and flowing nature of the circuit would suit the Ford Falcon FG Xs and while Edwards agreed they were confident heading into the event, there was some work to do overnight to find that something extra.

"Certainly we came into this weekend with the belief our car would be pretty quick here, and it's not bad, but it's not quite as quick as the Triple Eight cars at the moment. So we'll scratch our heads a bit tonight and try and tune her up a bit."

He says they aren't far away: "No and there's never a long way in this championship."