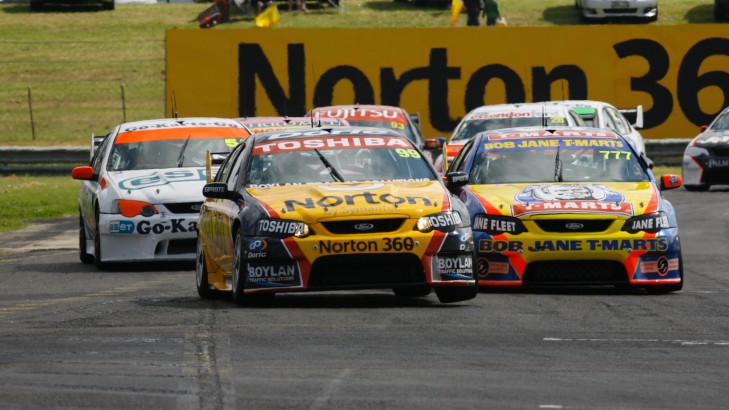 TheV8 Supercars Dunlop Series celebrates a significant milestone at the UBET Perth SuperSprint at Barbagallo Raceway this week - its 100th series round.

Over the years there have been 256 individual races held, some of them won by a comfortable distanceand others claimed by the smallest of winning margins.

We've delved back into the category record books to go back through time and find the five closest finishes in the 15-year history of the Dunlop Series.

Just for something different we've started the countdown with the fifth closest finish and counted down to the closest - followall the way through the story to find out the closest.You won't believe how crazily close it was! 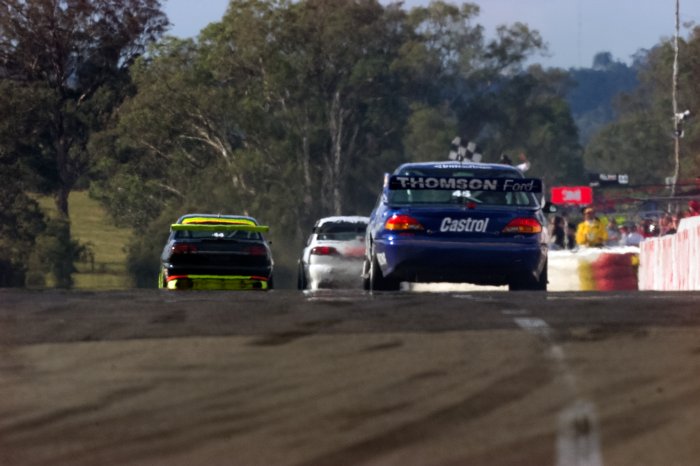 White started off the front row and capitalised on his great start.

In the dying laps he was forced to defend from Mal Rose's Commodore. Rose made a last ditch attempt up the inside of White at the final turn, putting the two cars neck-and-neck heading towards the finish line.

White was awarded the race win in a photo finish.

"This was my first run at Oran Park and we'd been behind the eight ball all weekend. That was absolutely awesome," said White after the race.

These days White runs MW Motorsport in the Dunlop Series and has claimed two series crowns with drivers Jonathon Webb (2009) and Dale Wood (2013). 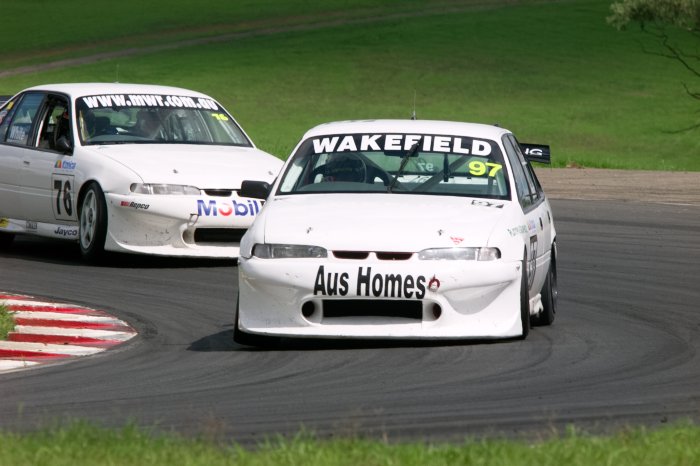 Incredibly, the first ever race in the V8 Supercar feeder category still remains in the top five closes finishes in the record books.

Wayne Wakefield, a successful Commodore Cup racer, piloted a VS Commodore (reviving the body shell that Tomas Mezera rolled in his spectacular 1997 Bathurst crash) in the debut of the 'Konica V8 Lites Series', while Matthew White's VS Commodore was the re-liveried 1997 Perkins/Ingall Bathurst 1000 winner.

Starting from fifth on the grid, Wakefield snuck down the inside of a then 19-year-old Dean Canto into second.

Race leader Ryan McLeod's Kmart Commodore was the first victim of suspected oil on the track, slipping off and allowing Wakefield into the lead.

Several more drivers fell victim to the suspected oil slick, which elevated White into second place, though Wakefield narrowly took the win in the first race in series history. 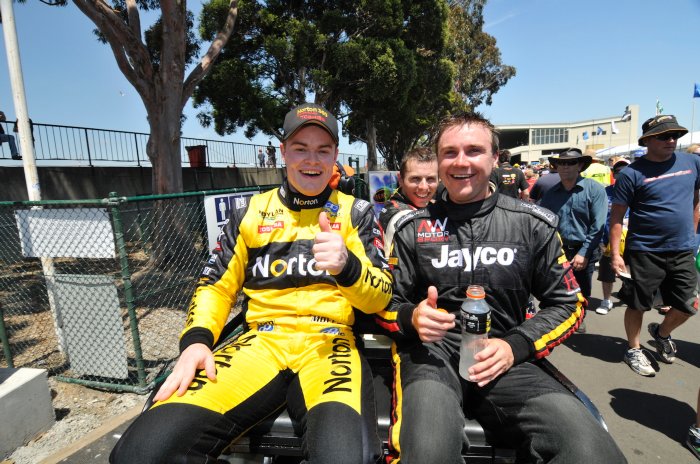 From fifth on the grid, Team Jayco's David Russell fought hard in the opening lap melee to slot into second place behind the BF Falcon of James Moffat.

The Norton 360-backed driver made a mistake that allowed Russell to take over the race lead. He powered away from the field, but on lap 12 of 15 Moffat moved back into second.

Moffat mounted a major attack on Russell for the lead in the closing laps but the latter held on for the victory.

Russell was driving a Falcon for Matthew White, meaning MW Motorsport cars and drivers feature in three of the five closest finishes in series history.

Russell described it as a "character building weekend" but said he was "hugely satisfied to win the final race and hold off a strong field for the entire distance."

And hold off he did - just! 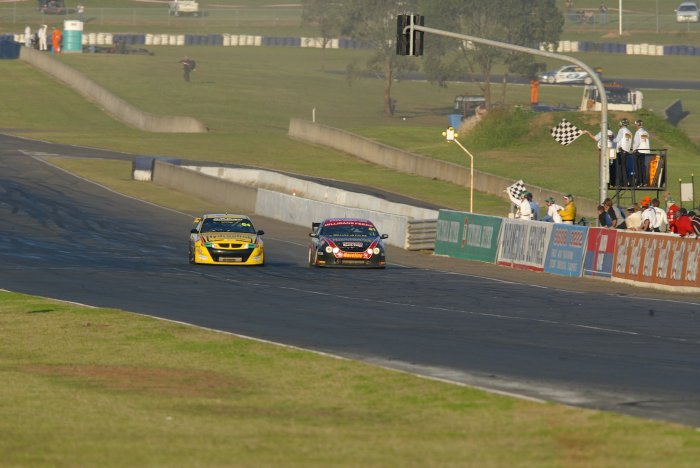 A young Mark Winterbottom proved his star quality by storming from near the rear of the grid to snatch the race win in the second-closest finish in series history.

Given Winterbottom had finished third behind Owen Kelly and Luke Youlden with 22 cars finishing in Race 1, 'Frosty' lined up 20th in the reverse grid Race 2 (only the finishing cars were reversed) but surely he couldn't have imagined he was about to create history.

With a handful of laps to go he was already a part of a four-way fight for the lead with Youlden, Jose Fernandez and the late Kiwi Mark Porter.

Winterbottom got a great exit out the final turn, and the horsepower of the SBR AU helped him pass Porter's Hydraulink Commodore to clinch the win by the tightest of margins.

"I had a good start for the first time in any of my races," Winterbottom said post-race.

"I got up to fifth, then had an off and went back to eighth. I thought 'gee that's the end of that race' but I managed to claw back through the field.

"On the last lap I saw Mark block a little bit on the last corner so I went wide and tried to get the run. We came home by the smallest of margins!" 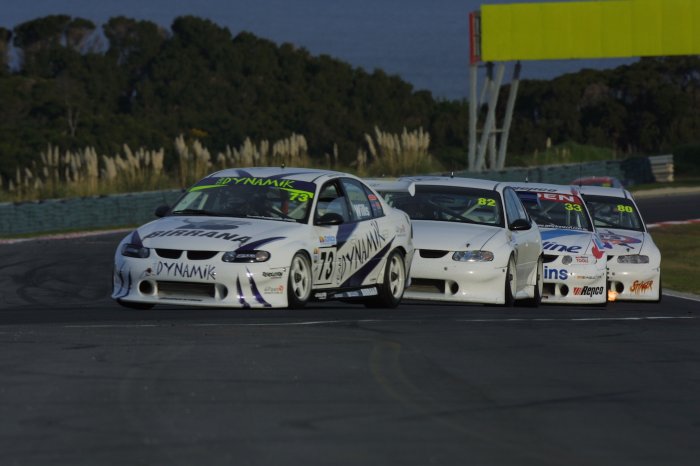 Then the Australian Drivers Champion from winning in Formula Holden in 2000, Simon Wills started on pole for the round's final 12-lap race in his ex-Gibson Team Dynamik Commodore with Paul Dumbrell's similar car third.

Wills took the lead on the opening lap from David 'Truckie' Parsons while Dumbrell battled with Leanne Ferrier (now Tander) for third.

By the time Dumbrell got into second place, he was 3.35 seconds adrift of Wills.

He closed in on the Team Dynamik Commodore over the last lap, and Wills' slow exit out of MG Corner allowed Dumbrell to slipstream him out of the final turn.

They ran side-by-side across the finish line, with Wills claiming the narrowest of race wins.

"I had a little bit of a problem and Paul caught up," he explained after the race.

"I thought I had him. I saw a yellow flag at the last corner and I thought 'nah he won't have a go at me'. Next thing I know he's alongside me! It was an interesting race but I got there in the end."

The V8 Supercars Dunlop Series hits the track tomorrow to kick off the UBET Perth SuperSprint, the 100th round of the category. Stay tuned to v8supercars.com.au and FOX SPORTS for coverage.