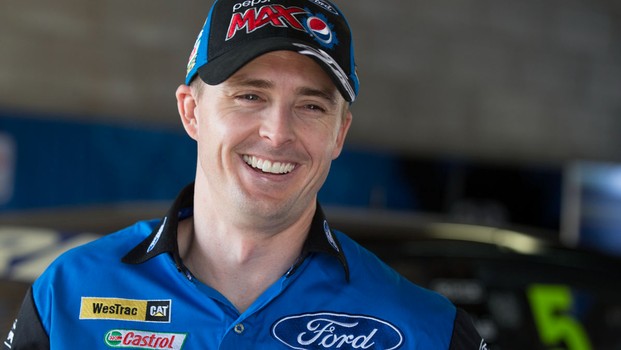 Drinking mojitos in his Speedos in Fiji might just be the tonic that finally kickstarts Mark Winterbottom's V8 Supercars season.

The Ford favourite was quickest in Practice in Darwin on Friday in preparation for three races at Hidden Valley Raceway over the weekend.

Winterbottom has been continually frustrated over the first five events of the year to leave him in the unfamiliarly low position of eighth in the Championship standings.

He's often shown speed in practice and qualified in the top three.

But the 32-year-old has endured pit stop struggles, gear box failures, shredded tyres and a few memorable high-speed door-to-door clashes with Holden rival Jamie Whincup that have soured his campaign.

With a two-week break since the last round in Texas, Winterbottom took his family on holiday while his Ford Performance Racing team had a test session at Winton Raceway in Victoria.

"While they were out there, I was having mojitos in my speedos in Fiji," said a relaxed Winterbottom.

"I tried to check in as much as I could.

"We've actually gone quite well this year at times. We've just had a few little mishaps."

Winterbottom clocked a best lap time of 1min9.2649sec in the fourth and final session in hot Top End "winter" conditions.

With temperatures reaching 32degC, he topped the timesheets by 0.1980sec ahead of Mercedes-Benz driver Tim Slade while Holden pilot Scott McLaughlin was next quickest.

The best of the four Nissan drivers was Michael Caruso in fifth but Todd Kelly, Rick Kelly and James Moffat all finished in the top 10.

Holden star Jamie Whincup took it easy in 15th position as he looks to extend his lead at the top of the standings while teammate Craig Lowndes was even further down in 23rd.

However, it was tough to gauge the true speed of the 28-driver field as teams were preserving their best tyres for Saturday's qualifying and 120km race.

Each driver will have eight soft and 12 hard tyres to use over the weekend, and Darwin is known as one of the hardest-wearing circuits given the heat and abrasive track surface.

It is a point not lost on Winterbottom.

"We're all tyre-limited in this Championship," he said.

"Until tomorrow, that's when you'll know what your race pace on that sort of tyre is. But hopefully we can carry on tomorrow."

Fresh tyres will be used in qualifying on Saturday morning before the opening race of the weekend – a 60/60 Super Sprint format which is split into halves and the second kickstarted with a double file rolling restart after a 15-minute break.

Tim Slade  ›
15' Pepsi Max Crew ›
2013 SKYCITY Triple Crown  ›
Stay In The Know
Sign up to the Virgin Australia Supercars Championship Newsletter
We use cookies to ensure that we give you the best experience on our website. If you continue to use this site we will assume that you are happy with it.Ok