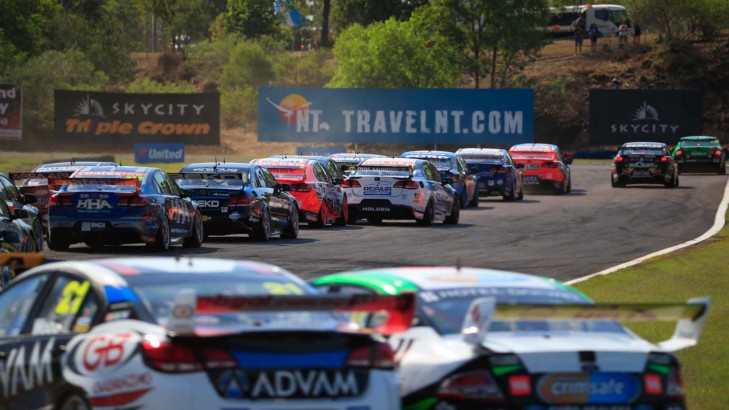 "Rumours, damn rumours," he said when asked about his interest in V8 Supercars, "I'll add some truth to those rumours."

Childress and Richard Gilmore, COO at Earnhardt Childress Racing Engines, then confirmed they have been looking to buy a team or at least establish a technical partnership with an Australian V8 Supercar team.

Neither man would comment on how big a cheque they're willing to write, but they're certainly shopping and are believed to be talking with prospective teams.

They aren't saying who it might be and no V8 Supercars team owners contacted by motoring.com.au admitted to any contact or even knowledge of pitlane rumour that Childress was sniffing around.

Like Childress it has a relationship with General Motors and also recently added Lucas Oils as its windscreen sponsor. Team boss Steve Hallam is one of the most respected engineers in pitlane and spent a period in NASCAR at Michael Waltrip Racing before coming to Australia.

But Jonathon Webb was unequivocal in his rejection of such a proposition: "I have no idea what you are talking about," he said.

Childress' interest follows on from the much publicised negotiations between Dick Johnson Racing and US motorsport icon Roger Penske, who has significant business investments in Australia through his truck distribution business.

Penske has been in Australia this month working through the deal with DJR. He has confirmed in media interviews he would like multiple V8 Supercars champion Marcos Ambrose - who currently races in the NASCAR Sprint Cup for Richard Petty - to return home to head up the team if an agreement is reached. .

Gilmore told motoring.com.au that Childress' interest was directly related to the business of motorsport as he sees gains for his US racing interest through an investment in V8 Supercars.

"We believe that NASCAR will continue to allow technical advancements in engine development, possibly as soon as the 2015 season but more likely for the 2016 season," said Gilmore.

"We're looking to technologies such as carbon-fibre, safety systems and oil technologies," he said.

Gilmore says there are also sponsorship benefits for RCR as V8 Supercars potentially expands throughout the Asia Pacific, offering a lucrative foothold in one of the world's growing economic regions.

Of course, V8 Supercars has also made it clear if is keen to conduct a double-header return to Childress and Penske's home country in 2015 after a foray to COTA in Texas in 2013.

Childress would bring enormous resources to any V8 attack, offering a wealth of expertise in aerodynamics, engine testing and development and deep-pocketed corporate connections.

Earnhardt Childress Racing Engines builds more than 600 competition engines per year with a staff of 122. Aside from NASCAR, ECR works closely with Chevrolet on the Corvette Daytona Prototype program. Parent company RCR, which is based in North Carolina, has more than 480 staff on payroll.

22/06/2014
Stay In The Know
Sign up to the Virgin Australia Supercars Championship Newsletter
We use cookies to ensure that we give you the best experience on our website. If you continue to use this site we will assume that you are happy with it.Ok