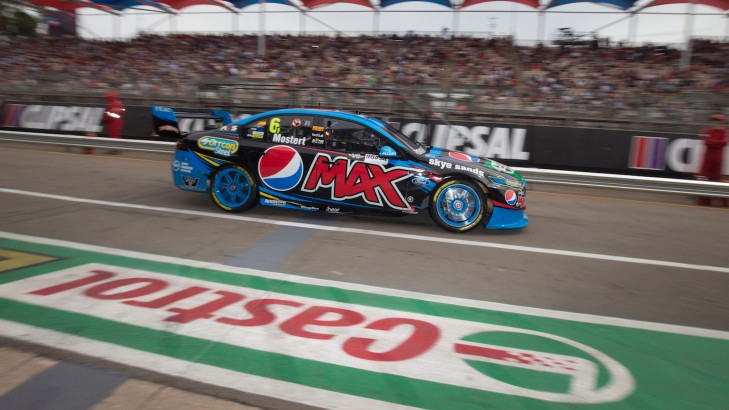 Chaz Mostert is confident of a return to his V8 Supercar by next year's opening round, the Clipsal 500.

The young gun, who suffered a broken femur and wrist in an horrific accident at the Supercheap Auto Bathurst 1000 earlier this month, made a surprise visit to the Gold Coast circuit on Sunday to cheer on his team.

And while there is a long way back from here, the 23-year old will stay involved with his Prodrive team as much as possible before he's able to physically return to the cockpit.

"I'm pushing for that now - I'm obviously in no rush, [these are] pretty big injuries.

"I need to support my team as best I can and if I can make it to Phillip Island and Homebush, have a bit of a driver's opinion on what car 6 is doing. I'll be here to help as much as I can."

Cameron Waters is standing in for Mostert in his Pepsi Max Ford Falcon FG X for the next two rounds. The two were paired for the Pirtek Enduro Cup, but Waters raced the Gold Coast with returning veteran Russell Ingall to finish 17th and 19th across the two races.

Mostert has been moved from Orange Hospital in New South Wales up to Queensland where his family is based for the remainder of his recovery. He remains in hospital but is hopeful of being discharged soon.

"I'm doing all my rehab up here in Brisbane, obviously because of family and stuff like that," he said.

"It's good to have loved ones around during times you need them so I'm leaning all on them at the moment; family friends as well. It's good."

A quick trip to the track on Sunday afternoon raised his spirits as well as teammate and close mate Mark Winterbottom's, who told v8supercars.com.au his bad results were a distant memory after seeing Mostert.

"I basically bribed the doctors to let me out for Sunday to come support my team," Mostert said.

"It [was] a bit of a tough day at the office for those guys. I don't know if I can quite make Pukekohe [next round in New Zealand] to spectate, but the plan is to make Phillip Island, so I'll see how we go."

The excursion was a positive one for Mostert, who enjoyed reuniting with his team.

"Getting out and seeing friends, family and getting some fresh air, it feels like my rehab has doubled," he said.

Winterbottom lost a chunk of his Championship lead at the Gold Coast and knows he and the team need to maintain intensity to stay ahead of Craig Lowndes in the title fight.

But that was out of mind given the chance to catch up with Mostert.

"[It was] nice to have him here, you don't feel like it's a bad weekend anymore when you look at him and he's all banged up, he's in a bad way," he said on Sunday.

"The weekend was average, you just want to go home - but he's here and it makes you quite happy. Good to see him, he's in good spirits."

Chaz Mostert  ›
15' Pepsi Max Crew ›
Stay In The Know
Sign up to the Virgin Australia Supercars Championship Newsletter
We use cookies to ensure that we give you the best experience on our website. If you continue to use this site we will assume that you are happy with it.Ok