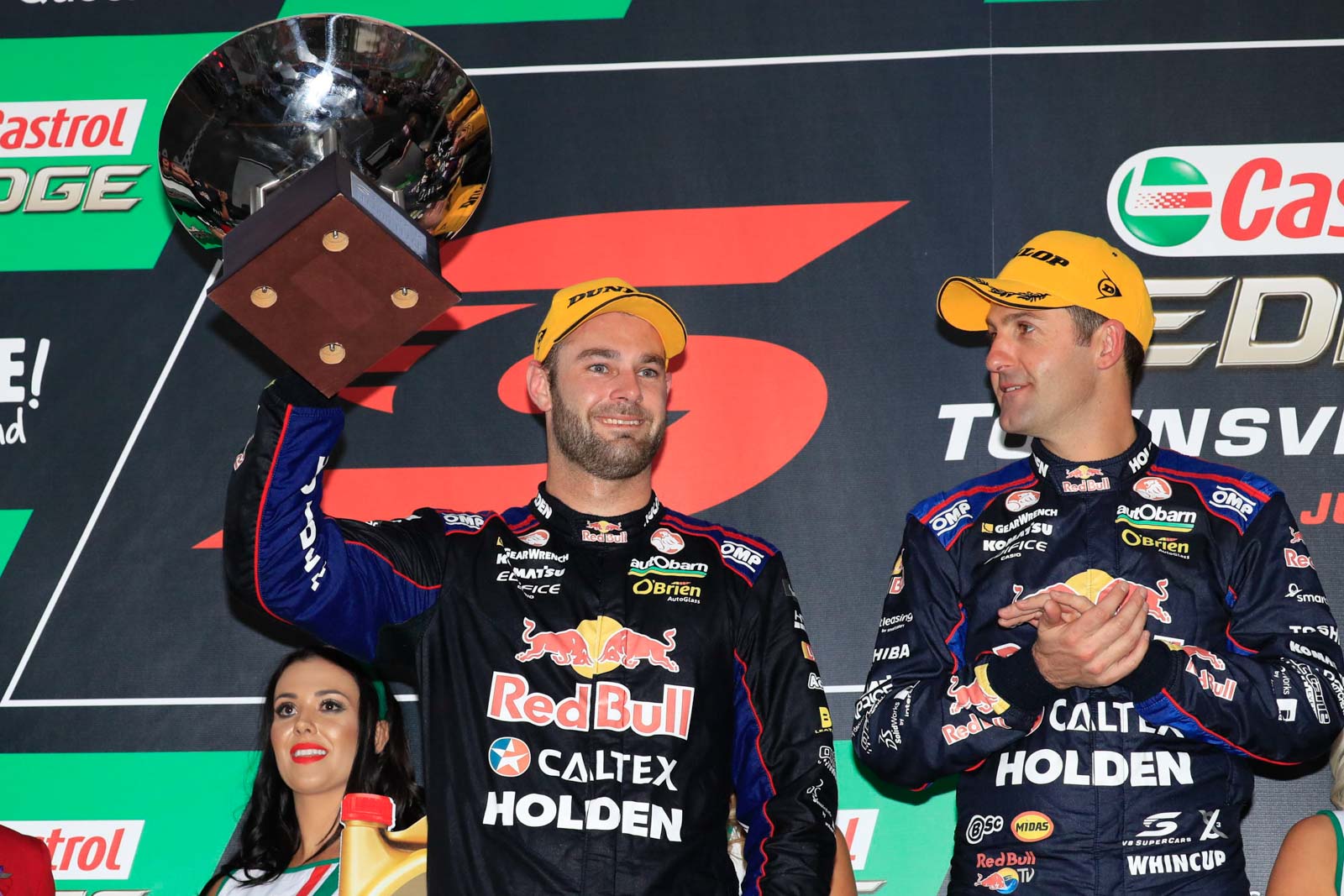 Mark Winterbottom predicts the mood will change at Red Bull Racing Australia once teammates Jamie Whincup and Shane van Gisbergen need to race each other to focus on winning the Championship.

After flat spotting a tyre by mistake early in Sunday’s 200km race in Townsville, Van Gisbergen was switched onto the preferred strategy to help ensure he continued to race at the front. The call to swap strategies was crucial to his win, with Whincup’s race hurt by the timing of the first safety car, that left him to finish fourth and off the podium.

While Van Gisbergen said in the press conference he had hoped to achieve a 1-2 finish for the team, defending champ and Ford rival Winterbottom believes that will all change as the quick Kiwi and six-time champ do battle for Supercars’ ultimate prize.

“Those two are going to have to race each other at some stage,” Winterbottom said.

“It’s all ‘lovey-dovey’ at the moment, they want each other up here but there will be a point where they don’t ... we'll see what happens, there's a long way to go."

The Red Bulls split the two wins at the Castrol EDGE Townsville 500, but Winterbottom ran with them on the podium each day and is tucked in third in the points, 75 behind leader Whincup. He, of course, believes he can topple the Holdens and deliver his second consecutive championship.

Van Gisbergen made in-roads over the weekend, jumping from fifth to second and just 53 points behind.

Red Bull team boss Mark Dutton believes they are all gelling, but admits it will be difficult if the team is in a position of managing two drivers in the title fight. In his two years as team manager, it hasn’t been a contest between Whincup and Lowndes come December, with Whincup running away with it in ’14 and Craig Lowndes the front-runner last year, battling with Winterbottom.

“All three drivers and all the engineers are working really well together – it is tough to manage cars at the front like that but it’s a good problem to have,” Dutton told supercars.com.

“We keep saying it but that’s where we want them, that’s the problem we want to have.”

He says they won’t deviate from what is best for the team until the very end of the season.

“There’s no preferential [treatment] and we don’t focus on each other. We really do work to say, ‘let’s do strategies that don’t hurt each other'," he said.

“We don’t try and race each other. You do that if you’re in a fortunate position come Homebush at the end of the year … we’ve done that before with Craig and Jamie many times, we’ve been in that fortunate position.

It’s not just the Whincup-Van Gisbergen battle they are focused on – there’s another front-runner in the team, too. Craig Lowndes struggled on Sunday after an error with his tyres, but is still in the hunt. He’s fourth in the championship and 153 points adrift from Whincup.

“Hopefully we have one, two, three at the end of the year racing each other for the final positions, that would be cool,” Dutton said.