Championship still “up for grabs” 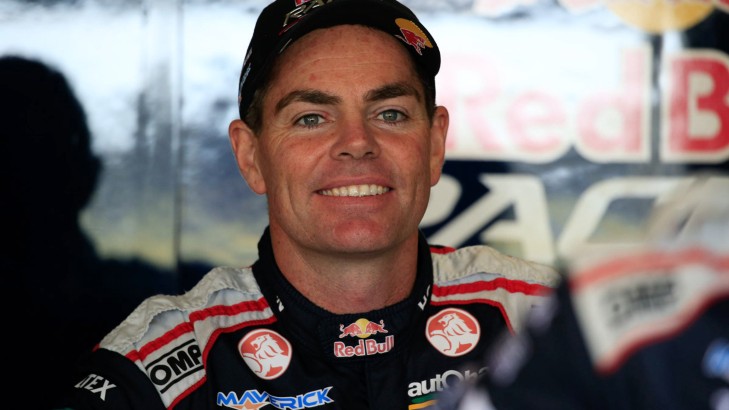 Craig Lowndes believes the V8 Supercars Championship is still wide open and is focussing on the positives from Sandown, rather than seeing the last round as a setback in his campaign.

The Red Bull racer dropped from third in the points standings to fourth after finishing 13th with Steven Richards in the 500km classic - but all eyes are forward to the Supercheap Auto Bathurst 1000, which can change everything in an instant, with 300 points on offer for the winner. Lowndes' gap to leader and Sandown winner Mark Winterbottom is 423 points.

Lowndes is a five-time winner of the Bathurst event and was in the race until the end last year, despite copping a late drive through penalty for contact with Winterbottom.

It was a driving error he thinks ultimately cost him at the last event at Sandown, too, but is fully focused on improvement for the October 1000km enduro and the Championship.

"I think at Sandown it definitely didn't go to plan - we were third and I think we've moved back to fourth in the Championship.

"But look, who knows what's going to happen at the next two rounds - it's still 600 points and anyone could still have a bad round.

"It's just unfortunate we didn't maximise Sandown as much as we'd hoped or should've, so we've got to make Bathurst and the Gold Coast count."

Three Prodrive Falcons sit ahead of Lowndes in the title race in Winterbottom, Chaz Mostert and David Reynolds. Mostert won the Bathurst 1000 last year, Winterbottom the year before, and Reynolds finished second in 2012 - so Lowndes is certain they will pose a big threat.

"They were always going to be strong, there's no doubt about that," he told v8supercars.com.au.

"I think they proved that they had good fuel economy as well as good speed, and Bathurst is all about those elements - it's not just having good car speed, it's about having strategy, fuel consumption and economy, and obviously staying out of trouble.

"They definitely did that at Sandown and credit to them, no doubt they'll look to do the same at Bathurst."

While Lowndes felt he and the Red Bull team found their feet by Sunday at Sandown, the damage had already been done in a way, after an error in the co-driver race meant Lowndes/Richards started 23rd.

Teammate Jamie Whincup looked a big chance to win three in a row at the circuit with Paul Dumbrell, but the combination of a tyre puncture and a foiled pit stop (which some thought shouldn't have been taken at that point in the race) threw them back in the pack and out of contention.

"I think that you've got to look at the positive side of it," Lowndes said.

"Our issue was - when we got the drive through penalty from contact with Jack [Perkins] - it put us at the back of the grid. It's always going to be a tough day from there, regardless of who you are.

"For us, I think you take a lot of positives out of it that our speed was good, we were - or at least Jamie's car - was very competitive for at least three quarters of the race, and we had good speed in the middle part.

"So - the results don't reflect ... the performance of the cars."

The team has far from given up, and boss Roland Dane has been irked by being beaten at Bathurst the last two years, so no doubt it'll be all guns blazing from fan favourite Lowndes and all-time champ Whincup come October 11.

With the street circus on the Gold Coast to follow, Lowndes is taking it in his stride and is confident he and the team can adapt to the different circuits to push for the title.

"Bathurst is going to be a completely different circuit to Sandown, obviously it's a fast flowing circuit, longer lap, huge elevation - just the nature of the circuit is very, very different to Sandown," Lowndes said.

"Gold Coast again is another complete element of circuit, it's going to be tough, bumpy, tight - so you've got three circuits that I guess you couldn't get any further apart."