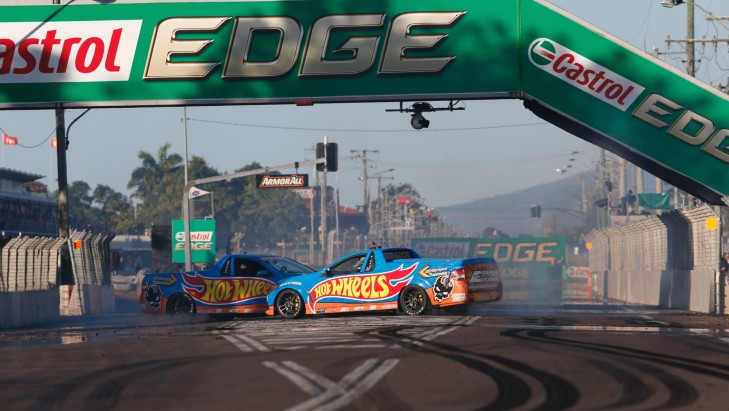 Get ready to Rock & Race today at the Castrol EDGE Townsville 400, with both Hilltop Hoods and V8 Supercars on hand to heat up the tropics.

Don't miss hearing the familiar roar of the V8 Supercars as they descend on the streets of Townsville for the first time in 2015. With three 30-minute practice sessions kicking off at 8.15am, the teams will be giving it their all to tune their cars ahead of a big weekend of racing.

And the action will continue into the night, with Hilltop Hoods headlining tonight's concert under the TAFE Queensland SuperTop. The Funkoars and ILLY will also take to the stage to give race goers the license to party.

But before then, be thrilled by the quality support categories taking to the track to burn some rubber, including the V8 Supercars Dunlop Series, Porsche Carrera Cup, V8 Utes and Formula 4, which makes its Australian debut this weekend. You can even check these cars out in the flesh by making your way down to the support categories paddock. Located on the outside of turn two and the inside of turn one, get up close and personal with the teams and drivers as they prepare for the on-track action at Reid Park.

See the stars of the Showtime FMX Crew on track today as they perform their epic show from 10.30am today. Performing tricks including rock solids, jack hammers, nac nacs and backflips, the Showtime FMX crew are sure to thrill you with their aerial antics.

You can even meet the crew after each show at their stand down at Merchandise Alley. While you're there, why not show your true V8 Supercars colours and stock up on your favourite team's merchandise, or enjoy a drink at the bars and grab a bite to eat.

Keep the little race fans entertained at the Disney Fun Zone. Located opposite the pit garages and open from 10am to 4pm, the Disney Fun Zone features a brand new inflatable Disney/Pixar Cars obstacle course that will have the kids bouncing off the walls and sliding down slopes. The all new Cars Ice Racers ice rink will put their ice racing skills to the test, while they can catch up with Lightning McQueen and Mack the Transporter from Cars and chill out and watch a movie in the cinema. The Cars race track returns to Townsville, as well as a bunch of craft activities and interactive iPad Zone for little gamers and puzzlers alike.

Any car enthusiast will be in absolute paradise down at the Auto Show. Make you way down to the inside of turn three to see an assortment of cars on showcase, ranging from 1920's Hotrods to Moderns.

The Castrol EDGE Townsville 400 is sure to heat up the tropics. Don't miss a second of the action, book your tickets now at ticketek.com.au.

Street fights are back

Dutton back engineering Whincup this weekend

Meet the drivers at tonight's SuperWelcome